Earlier in the week, MATIC made headlines after dropping more than 60% in the span of a few minutes and a few other Binance IEO tokens followed with double-digit losses.

Fast forward to today and many altcoins are back to producing double-digit gains on their BTC pairs. At the time of writing FunFair (FUN) is up 26.6%, WAVES 15.31% and THETA 12.36% and that’s just pointing out a select few.

Meanwhile, Bitcoin appears bearish on the 1-hour to the weekly timeframe and barring quick day trades the price action leans towards bears and pales in comparison to what is happening with altcoins.

Interestingly, despite Bitcoin’s bearish bias, Bitfinex longs have increased significantly (56%) since Nov. 22 and this shows that many traders believe the decrease in selling pressure and the last major drop to $6,530 on Nov. 25 was the bottom.

The current price action suggests otherwise, and savvy traders will recall what usually happens when either long or short positions skyrocket. 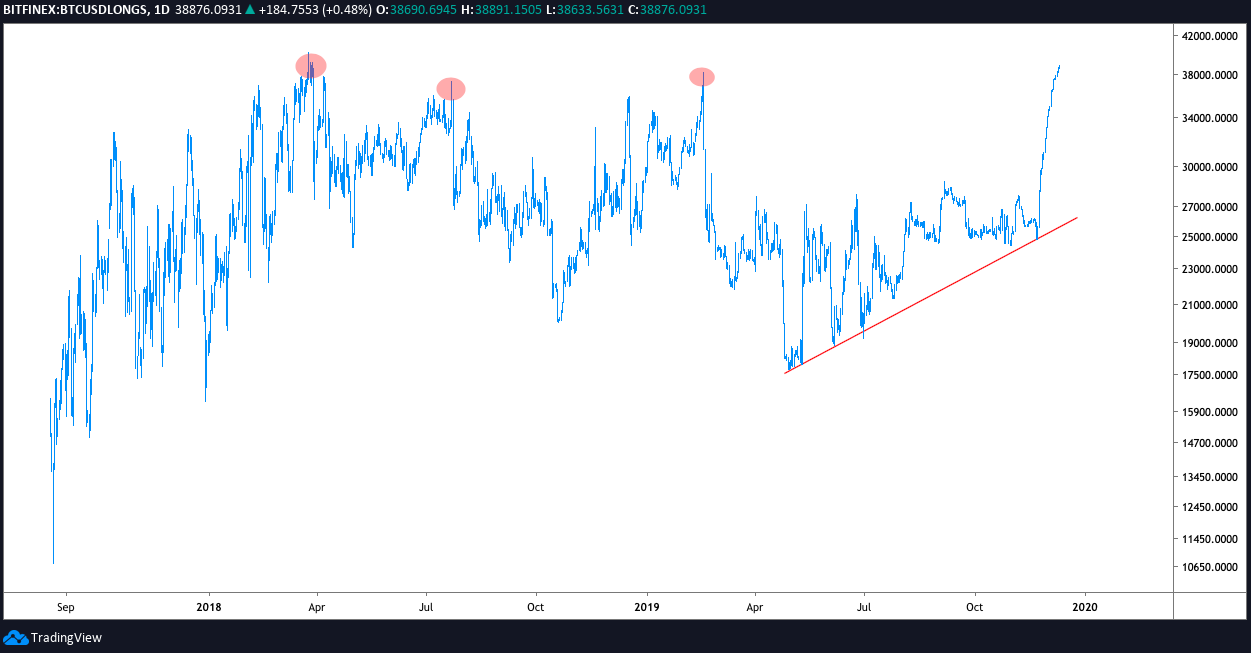 In the event that BTC falls below $7,080 and $6,800, many analysts expect the price to drop to $6,500 where the price made a local bottom on Nov. 25. This would place Bitcoin price at the lower descending channel trendline. However, the volume profile visible range (VPVR) shows a lack of support in this area. 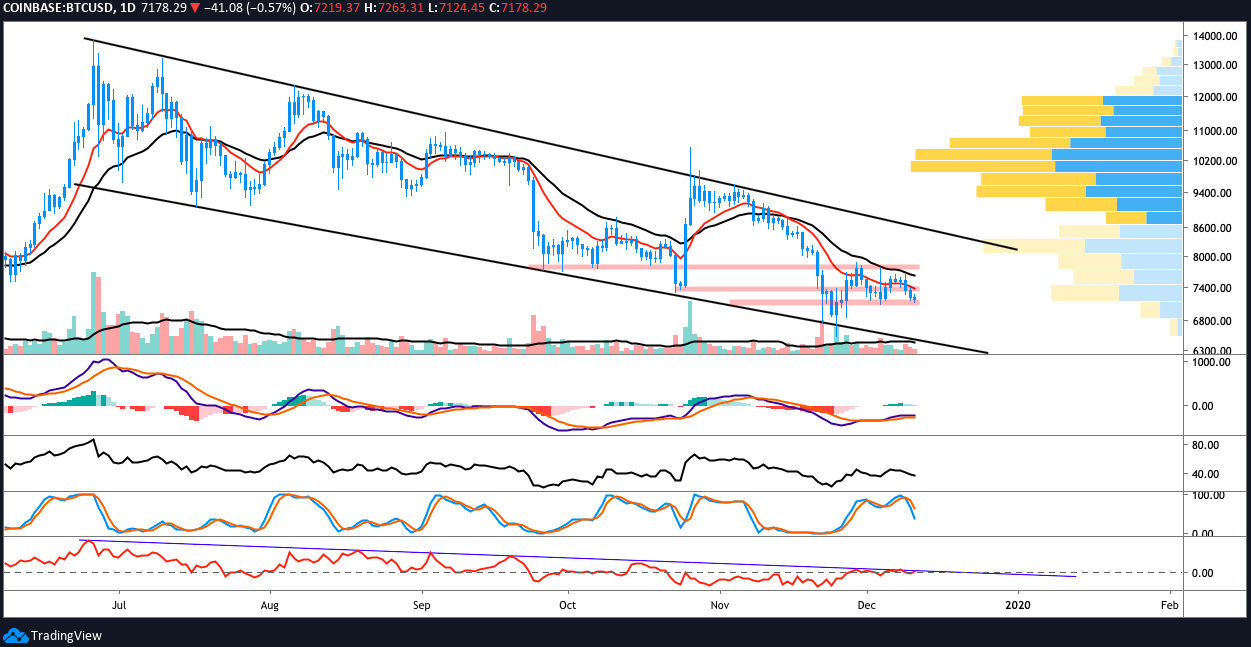 In the daily timeframe, the moving average convergence divergence histogram (MACD) shows momentum beginning to wane and the signal line has flattened as the price is pinched between $7,150 and $7,300.

As mentioned in the previous analysis, the VPVR suggests that demand does not really kick in until $6,000 and more so around $5,530.

Regarding Bitcoin’s short-term price action, the digital asset continues to post lower highs and is capped below the 12-period exponential moving average (EMA). 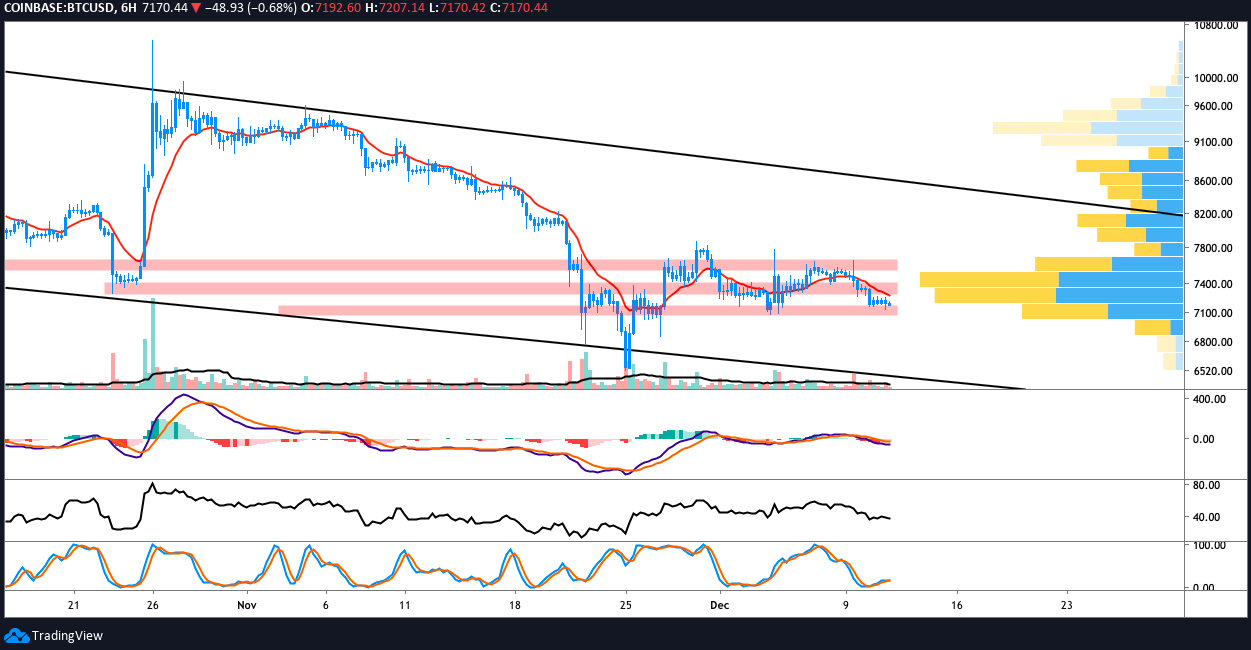 Before opening a position, traders should look for the price to cross above the 12-EMA and the previous lower high at $7,400. 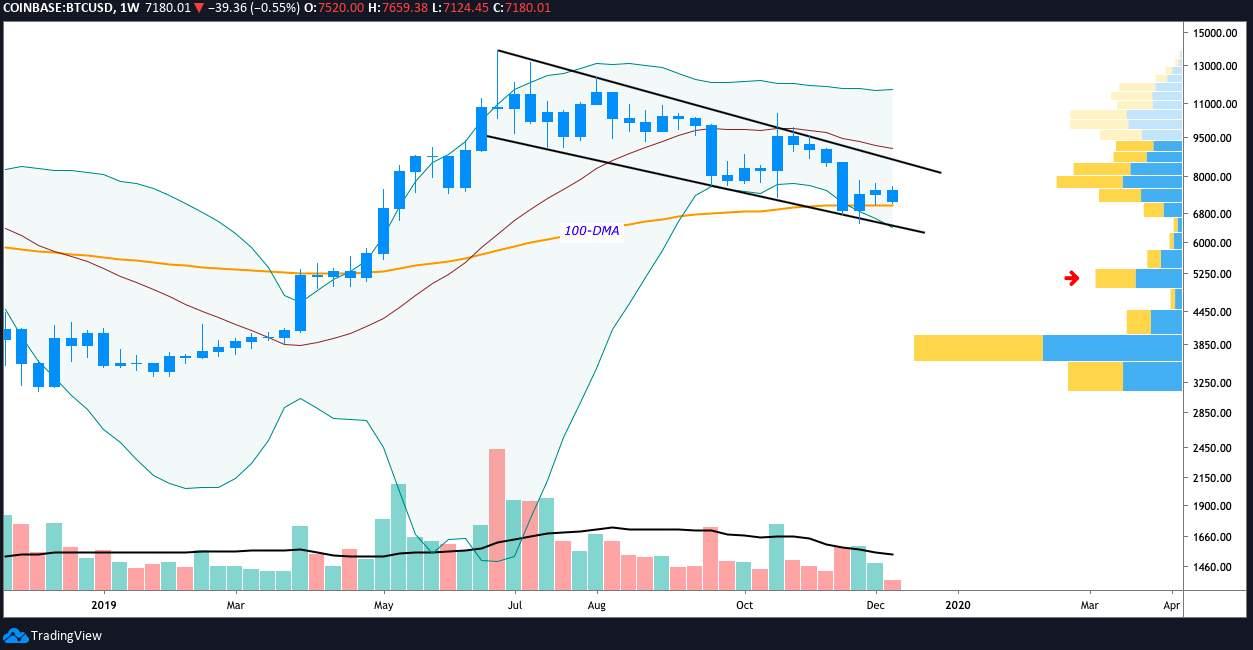 A glance at the weekly timeframe also shows BTC/USD hovering slightly above the 100-WMA ($7,000) for the second week in a row. $7,600 is clearly shown as a point of challenge and any high volume breakout will need to sustain above this level.

The lower Bollinger Band arm lines up with the bottom descending channel trendline at $6,466 and as mentioned earlier, $5,330 appears to be the next strong level of support.

Throughout this week, traders should keep an eye on the $7,080 price level and the BTC/USD Longs at Bitfinex.

The views and opinions expressed here are solely those of the author (@HorusHughes) and do not necessarily reflect the views of Cointelegraph. Every investment and trading move involves risk. You should conduct your own research when making a decision.