Volatile or not, there’s growing public demand for retailers and businesses to accept payment in cryptocurrency. According to a survey published in June by the United Kingdom-based crypto-exchange CreditCoin, 75 percent of American consumers want the option to use cryptocurrencies to pay for items they purchase in stores. Sadly, the proportion of stores providing this option doesn’t seem to have reached three-quarters yet.

However, the number of merchants accepting Bitcoin (BTC) and other coins is nonetheless steadily increasing, with the number of Bitcoin-accepting stores reported to Coinmap — worldwide — had risen by 3,716 in a single year. There is, therefore, continuing interest among businesses in accepting cryptocurrency as a means of payment, even if the noticeable ups and downs of the crypto-market has strengthened the popular impression that such use might not be 100 percent optimal right now.

Yet, a question remains for those merchants still undecided on whether to jump into the world of crypto payments: Which coin is the most usable and practical as a means of payment? Well, Bitcoin has an advantage insofar as the fact that vastly more people hold the original cryptocurrency than they do any other. However, numerous altcoins — particularly Bitcoin Cash, Dash and Litecoin — are already faster and cheaper than Bitcoin as a method of payment, and while they may lack the value of their older rival, they currently provide a more seamless retail experience.

That said, businesses are increasingly becoming less likely to face an either/or choice when deciding on whether to accept crypto as payment. That’s because a number of companies are providing crypto-payment portals that enable merchants to accept a variety of different currencies, while most major currencies are regularly taking steps to improve their transactions speeds and cost-effectiveness. As a result, retailers of the future will find that they can take greater advantage of the fact that people hold (and want to pay for things with) different currencies for different purposes, making the situation a win-win for more than one single coin.

One of the simplest and most important requirements that has to be met by a cryptocurrency before any business begins accepting it is that it be held by a large number of people. If this condition isn’t met, then a merchant would be limiting their market by accepting it rather than a more popular rival. This is why — forgetting how cryptocurrencies and their blockchains actually work for a moment — Bitcoin is still the most viable currency for retailers to accept.

There are now some 27.6 million Bitcoin wallet addresses in existence, while there are in fact 40.7 million Ethereum addresses. However, before it’s concluded that there are more Ethereum holders than Bitcoin holders, it needs to be pointed out that a significant proportion of these addresses are smart contracts rather than wallets — and there’s also the fact that the Ethereum blockchain houses 599 ERC-20 tokens, which are included in its address count. And while there’s no specific data that breaks down this figure into contract and wallet addresses respectively, there is data on the number of addresses that have been active within the last 24 hours, and it shows that Bitcoin has more active wallets than any other coin: 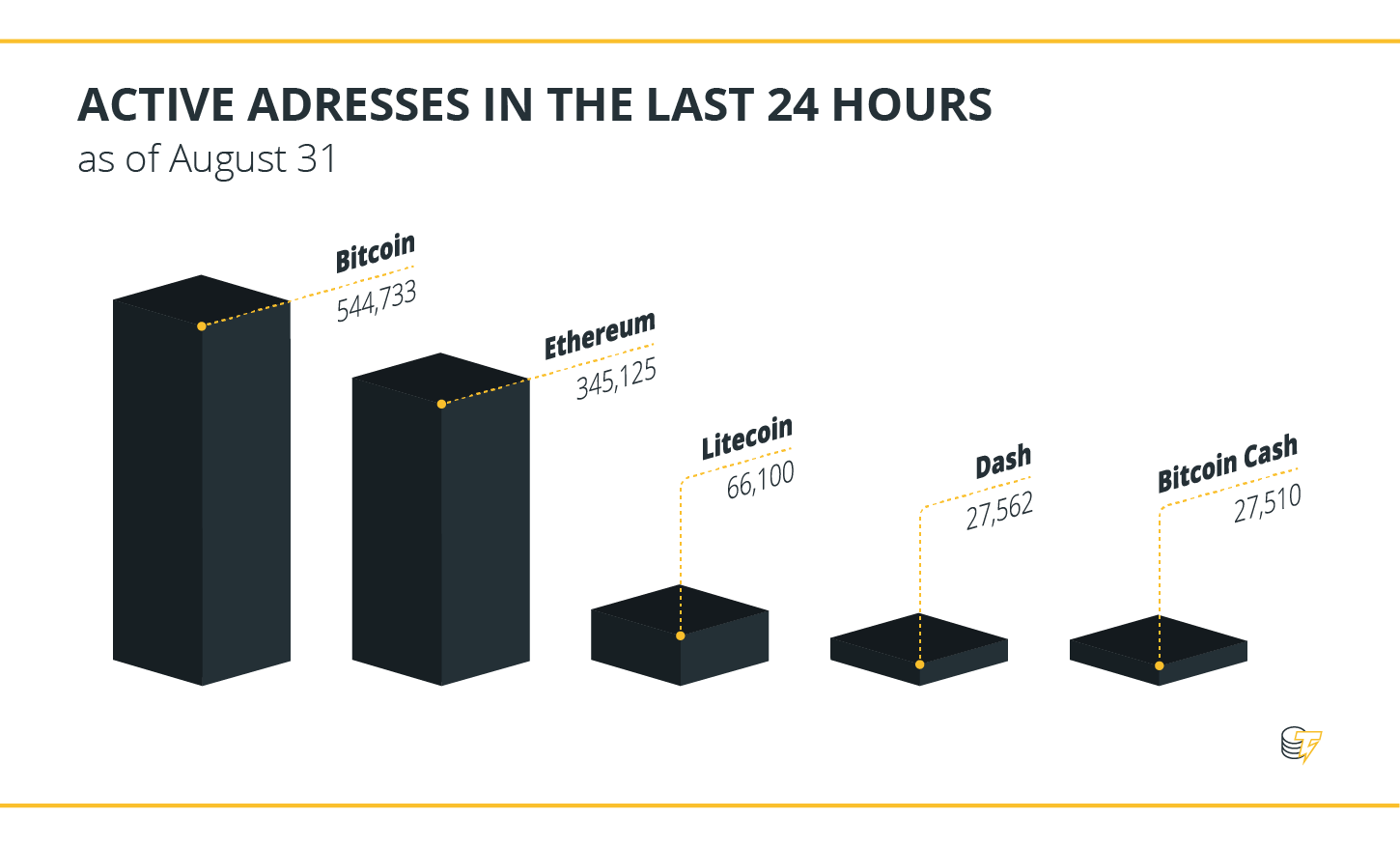 Putting aside estimations and calculations, there’s other evidence to suggest that Bitcoin is the decisive winner in crypto popularity stakes. In March, consumer website Finder.com published a survey which discovered that 5.15 percent of Americans owned Bitcoin, compared to Ethereum’s 1.8 percent and Bitcoin Cash’s 0.9 percent. Similarly, a poll of gamers conducted by the Swiss-based gaming company also found that Bitcoin was the most popular cryptocurrency, with 83 percent having purchased Bitcoin compared to 75 percent buying Ethereum. And lastly, 60 percent of Americans have heard of Bitcoin, with only 46 percent and 41 percent having heard of Ethereum and Litecoin respectively.

This all suggests that, for any merchant wanting to ensure that they open their doors to as many potential customers as possible, Bitcoin would be the way to go — that is, if they could accept payment in only one cryptocurrency. And according to those who track merchant acceptance of cryptocurrency, it appears to be the way most customers and merchants are still going, despite the recent growth in the usage of altcoins.

Devan Calabrez, the co-founder of crypto-merchant search engine Spendabit, which is currently inviting retailers to participate in a new survey on the coins they accept, said to Cointelegraph:

“BTC is by far the dominant cryptocurrency for transaction. This is likely due to the maturity of BTC, its ‘brand recognition’ and the momentum of Bitcoin.”

Calabrez explained that much of the draw of Bitcoin is its ability to attract new markets: