Venezuelans have taken to Bitcoin for liberation as the country struggles with runaway inflation. The transition serves as a testament to BTC’s core value.

Venezuela is in economic ruin. Corruption, a collapsing oil industry, and ill-conceived socialist policies have plunged the country into hyperinflation. President Nicolás Maduro, appointed successor to Hugo Chávez, who died in 2013—has clung to power by eliminating rivals and dismantling the judicial system.

Earlier this year, Maduro has attempted to fix the problem by creating a dubious cryptocurrency allegedly backed by oil, the Petro. However, nothing has made a noticeable difference in reversing the country’s runaway inflation.

To combat the rapidly deteriorating Bolivar, Venezuelans have taken to Bitcoin. Trading volume on LocalBitcoins, a website for facilitating peer-to-peer BTC trades, has exploded. 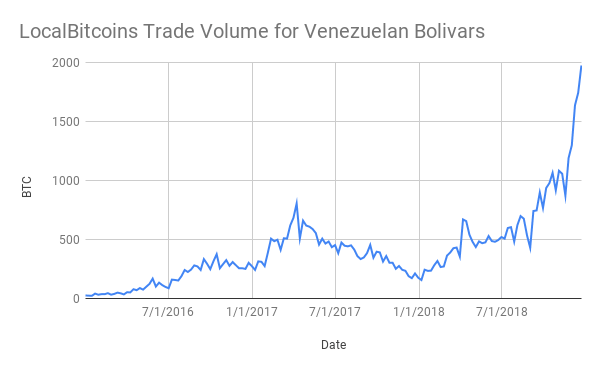 For comparison, CNN reported in March that the monthly minimum wage in Venezuela is just over $6. At that rate, a single week of Bitcoin trades represents monthly wages for 1.3 million Venezuelans.

The situation in Venezuela may be a harbinger for things to come. As Bitcoin adoption soars in the country, the innovation will make it harder for Maduro to extract wealth from his citizens through irresponsible fiscal policy.

It’s a profound change for people in the country—now, monetary freedom is within reach through the programmatic guarantees of cryptocurrency.

Mitchell is a software enthusiast and entrepreneur. In addition to writing, he runs a non-profit that teaches people about the blockchain. In his spare time he loves playing chess or hiking.

Get the Top 10 Cryptocurrency and Blockchain Stories Delivered Daily