As cryptocurrency prices continue to trigger Bitcoin naysayers, data monitoring site Coinmetrics.io co-founder Nic Carter has sought to rebuff them once and for all – with FUD dice.

‘You’ve Heard Of Bitcoin. You Do Not Like It’

“You’ve heard of Bitcoin. You do not like it,” he writes addressing his target market.

It’s rat poison, a ponzi scheme, and it’s boiling the oceans with its energy usage.

Carter further presents a list of major areas of disagreement that such critics regularly use to highlight Bitcoin’s alleged shortcomings.

These cover topics such as the cryptocurrency’s fixed 21 million supply and deflationary nature, along with mining costs, block size, volatility and more. Each aspect contains more than a hint of sarcasm.

“Bitcoin is a permissionless system that anyone on earth can use to store or send their wealth,” he continues discussing the ‘lack’ of know-your-customer (KYC) statutes in Bitcoin.

You don’t like the idea of free flow of money or untamperable wealth. You believe in capital controls and the USDA food pyramid. You prefer your steaks well done, and your money under the watchful gaze of the government.

The piece pays homage to extant efforts to combat naysayers which have achieved cult status within the cryptocurrency community in recent years. 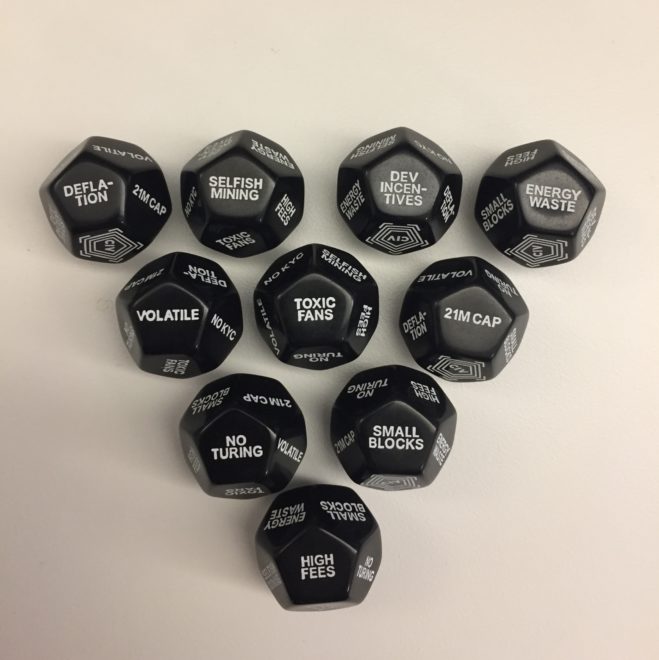 99Bitcoins’ Obituaries column, which records every instance of mainstream press sources declaring Bitcoin doomed, is now accompanied by its own random generator of fresh ‘obituaries.’

So too does Carter offer a chance to spin new warnings over Bitcoin’s impending doom – using dice which are available to purchase in real life (using Bitcoin). At the moment, customers can buy up to six dice while supply lasts.

“The dice are real. You can buy them today on Bitcoin’s lightning network at FUDdice.shop for 0.0005 BTC (~$3.09). Cast those dice with confidence, fiat-inflationists.”

What do you think about Nic Carter’s dice? Let us know in the comments below!