Bitcoin and cryptocurrency markets are well known to be highly volatile but a sudden 70% plunge in under one hour is extreme even for the scandal and scam-ridden crypto market.

Matic, a digital token used on the blockchain scalability-focused Matic Network, suddenly crashed around 70% last night, before a slight recovery.

[Update: 7:15pm December 11 2019] Matic failed to make up ground during today’s trading, with the cryptocurrency now priced at $0.017 per token. The fall in the matic price may have boosted one of its closest rivals, chainlink, which is up almost 10% on the day to $2.28.

The reason for the collapse in the matic price, which dropped to $0.013 from $0.042 in under an hour, was not immediately clear though the chief executive of popular Bitcoin and cryptocurrency exchange Binance, Changpeng Zhao, took to Twitter to reassure matic users.

Traders and investors have been scrambling to find out the reason behind the sudden price collapse, … [+] with concerns it could spread to Bitcoin and other major tokens.

“Our team is still investigating the data, but it’s already clear that the matic team has nothing to do with it,” Changpeng Zhao, who’s often known simply as CZ, said.

“A number of big traders panicked, causing a cycle. Going to be a tough call on how much an exchange should interfere with people’s trading.”

Meanwhile, the cofounder and chief operations officer of the Matic Network, Sandeep Nailwal, said he is investigating the cause.

“It will be clear very shortly that we are not behind this, as some [fear, uncertainty, and doubt] accounts are trying to insinuate,” Nailwal said.

“We will post a detailed analysis and we will come out stronger than ever from this evident manipulation.”

The Bitcoin price, as well as the wider cryptocurrency market, has not been hit by the sudden matic sell-off with prices of other major tokens relatively flat across the board.

One popular Bitcoin and cryptocurrency commentator and trader, Alex Krüger, highlighted matic’s rise and fall over recent weeks as “the stuff of dreams and nightmares.”

“What happened with matic can happen to any token,” Krüger said via Twitter.

“It would be very surprising for it to happen to the large caps, but it can still happen. Adjust selling volume by market cap or order book liquidity, and presto. Hence why crypto is traders’ paradise, investors’ hell,” Krüger said, adding there’s currently an “apocalypse” going on with minor cryptocurrencies. 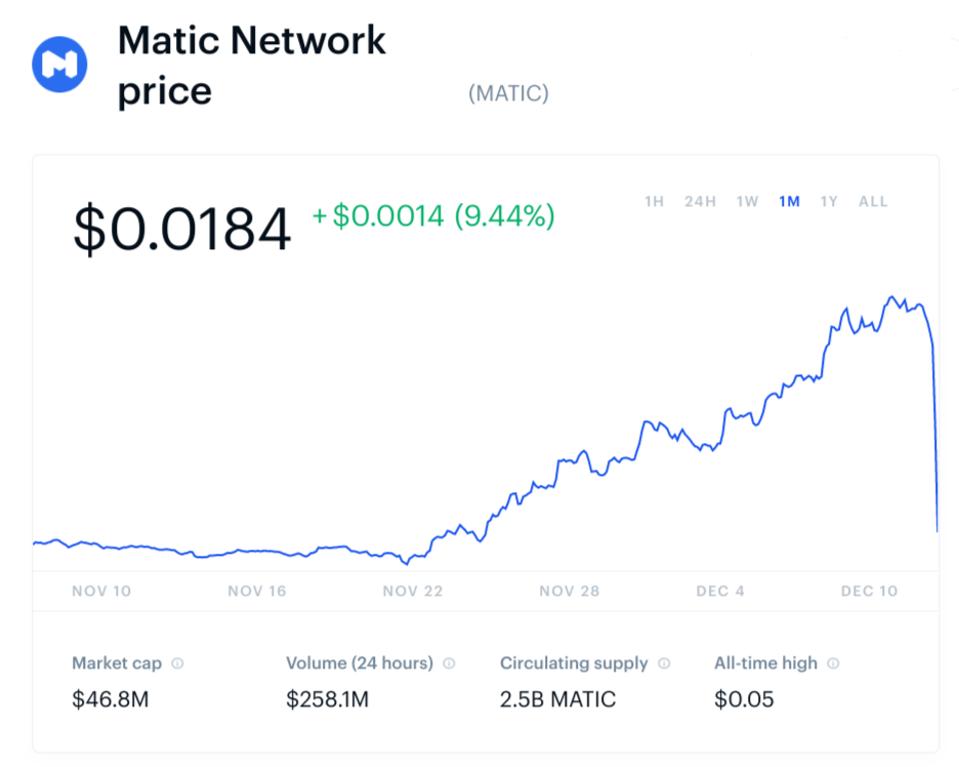 The matic price began a huge bull run towards the end of November, breaking away from the wider … [+] Bitcoin and cryptocurrency market.

Matic has soared over recent weeks and recorded a market capitalization of over $100 million for the first time since its launch earlier this year—up 180% in just two weeks.

The matic price has reportedly been boosted recently by blockchain-based game Battle Racers launching a range of so-called crypto-collectibles on the Matic Network sidechain, sending the price up by around 10% in a 24-hour trading period last week.

Meanwhile, some matic investors and traders have speculated the sudden move lower could be the result of a so-called pump and dump, where a large buyer inflates the price over time before offloading their holdings, or an exit scam, where the developers of a digital asset suddenly sell their holdings and abandon the project.