The volatile nature of the cryptocurrency market needs no introduction after its staggering gains in 2017 and subsequent losses of 2018. Looking at the market as a whole, however, gives us a bigger picture of who were the biggest losers and which coins were the best at storing value.

The total cryptocurrency market capitalization hit highs of a staggering $830bn in the week commencing January 7, 2018, some $813bn – or nearly fifty times that of the same week in 2017 which stood at $17bn, with Bitcoin 00 accounting for 35% of the total market share.

Nine months on and the euphoria that took hold at the end of 2017 has been replaced with despair and total capitulation of many investors. Total market cap now standing at $187bn; a staggering $643bn or 77% lower than highs earlier in 2018.

It is important to note that while the 2017 hype cycle has somewhat reversed, the total market cap is still 11 times what it was at the start of 2017.

Whilst some of the latecomers to the 2017 market are the biggest value losers, many investors in the space are still waist-deep in gains.

Bitcoin 00 has lost the greatest total value of $179 bn, representing a reduction of ‘only’ 62% from the highs seen earlier in the year, however, compared to an 85% reduction in that of the altcoins, which have lost $464bn.

Having spectacularly inflated and subsequently deflated, we can take a closer look at the biggest losers in the market:

Ripple, Ethereum 00 and Bitcoin Cash 00 have lost a staggering $244bn; more than twice the current total market cap of Bitcoin and nearly the total value of Bitcoin at its heights.

The only top coin to ‘outperform’ Bitcoin is EOS 00, which has only lost 43% of its value earlier in January 2018 and doubled its market share, according to data from Coinmarketcap.com.

While the remainder of the market appears to be continuing to fall, Bitcoin has represented a relative flight to safety for many investors.

Bitcoin has regained some 23% of the total market share from altcoins, hitting a dominance of 58%, with no sign of slowing down.

So while questions remain as to where the bottom will be found for each cryptocurrency, Bitcoin has been stubbornly holding up its market cap lows at around $100bn as others have ‘decoupled.’ 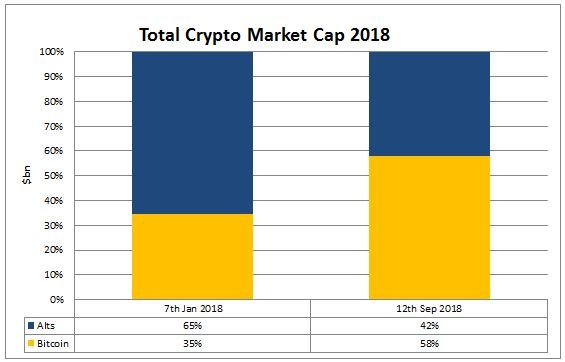 Assuming investors do not leave the space, a ‘flight to Bitcoin’ may result in an uptick in market transactions.  Many investors are now tracking Bitcoin value on a network transaction basis, meaning an uptick would potentially serve as an indicator of a value investment with Bitcoin being 62% below its highs of around $20,000.

Questions will remain as to whether investors will return to the lower cap coins after such large price swings without fundamental demonstrative value. But surely some of those who exited the market will find it difficult to resist getting back into a market, which is down 85% from its previous highs.

Is the market dominance reversal indicative of the beginning of the end of the market correction, or is there some way to go?

Will the Bitcoin dominance continue for the forseeable future? Let us know your thoughts in the comments below.