Failure to Get Rid of Middleman

Bitcoin’s creator, Satoshi Nakamoto, pioneered Bitcoin as a way to get rid of the middleman (financial institutions) in order to cut out transaction costs, and make smaller transactions cheaper. Unfortunately, Bitcoin has totally failed to serve its purpose in this regard. The cryptocurrency is considered “digital gold,” and has regressive transaction fees that make smaller purchases more expensive compared to credit card.

Take a look at the processing fees of these popular credit card companies:

The overall average fee is 2.23% per transaction in the United States. Most transaction fees are baked into product prices for merchants, but sometimes when your bill is too small, merchants charge you a small fee if you use a card. So you are in fact indirectly paying to use a card. Now, since Bitcoin was intended as a payment solution for small transactions, imagine you spend $20 at the grocery store using a credit card: that is $0.45 for the transaction.

The point is that despite being created as a practical, superior alternative to current payment methods, Bitcoin is the inferior option with regressive transaction fees that render smaller purchases pointless, and longer processing times than credit cards.

Failure to Serve the Unbanked

Another appeal of Bitcoin was that it, along with other cryptocurrencies, would gain traction with people who did not have banks to rely upon for their transactions. 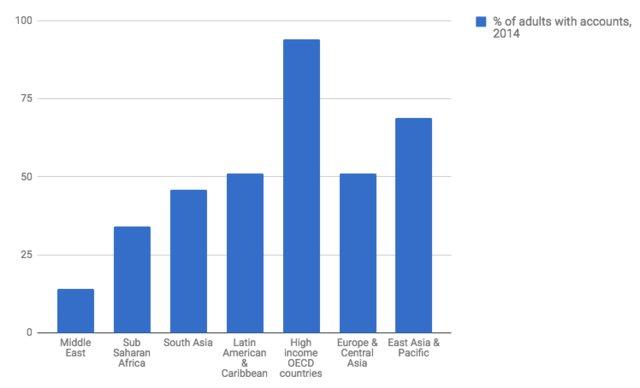 The chart above is based on the World Bank’s data from 2014 on the percentage of adults who have a bank account by region. The idea is that Bitcoin would be used as a daily currency in places with higher rates of unbanked adults, such as Africa.

However, that has turned out to be wishful thinking. 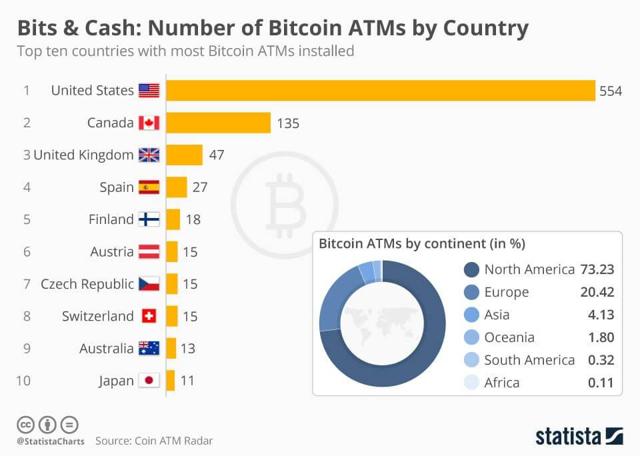 The chart above shows the popularity of Bitcoin in each country by tracking the number of BTC ATMs per country. Comparing the World Bank’s chart with this chart proves that regions with higher rates of banked adults have more Bitcoin ATMs, which means higher Bitcoin market penetration exists in regions that already have robust financial systems and payment systems. This is purely due to speculative trading of Bitcoin, and has nothing to do with the utility of the coin. In this case, Bitcoin has failed to gain prevalence in regions that would gain most from the utility of a decentralized payment solution, such as Africa, which has the second lowest rate of banked adults and the lowest amount of Bitcoin ATMs among all continents.