As it stand, Bitcoin is the most valuable crypto coin out there. With a market capitalization of $112.68 billion at the time of press, the pioneer coin is the most dominant in the space contributing around 53 percent of the total crypto transactions. And from coin trackers, we can see that Bitcoin average trading volume is upwards of $2.78 billion.

But, it could be more. Remember, while BTC related volumes is around $2.78 billion and stemming mostly from exchanges as Binance and Huobi located in the SE Asia, others as Ethereum and XRP are lagging dominating a mere 10 percent and eight percent respectively. This is despite the hype around the US Securities and Exchange commission delivering a favorable ruling later this year or early next year. The lack of dominance expansion in XRP goes on to show that Bitcoin is enjoying trailblazer status and is asserting itself as an on-demand coin that is open for investment.

Safe the price, charts talk of a different story. Yes, Bitcoin continue to make headline but as it does, common investors are bleeding thanks to a 75 percent drop in prices. While bears ravage the market, the 10-month crypto winter is about to end thanks to a mix of technical and fundamental factors. As such, we strongly believe that the psychological $100 billion market cap will hold and propel prices back to the $12,000 to $15,000 price range by Q4 2018 or early Q1 2019. Here’s why:

First, although sellers have been dominant this year thanks to implementation of stifling government regulations, pure fear and crack down of exchanges in SE Asia, bears didn’t build enough momentum to drive prices below $6,000. Therefore, as prices move inside a descending wedge, the main support of $6,000 holds and support prices every time there is uncertainty. 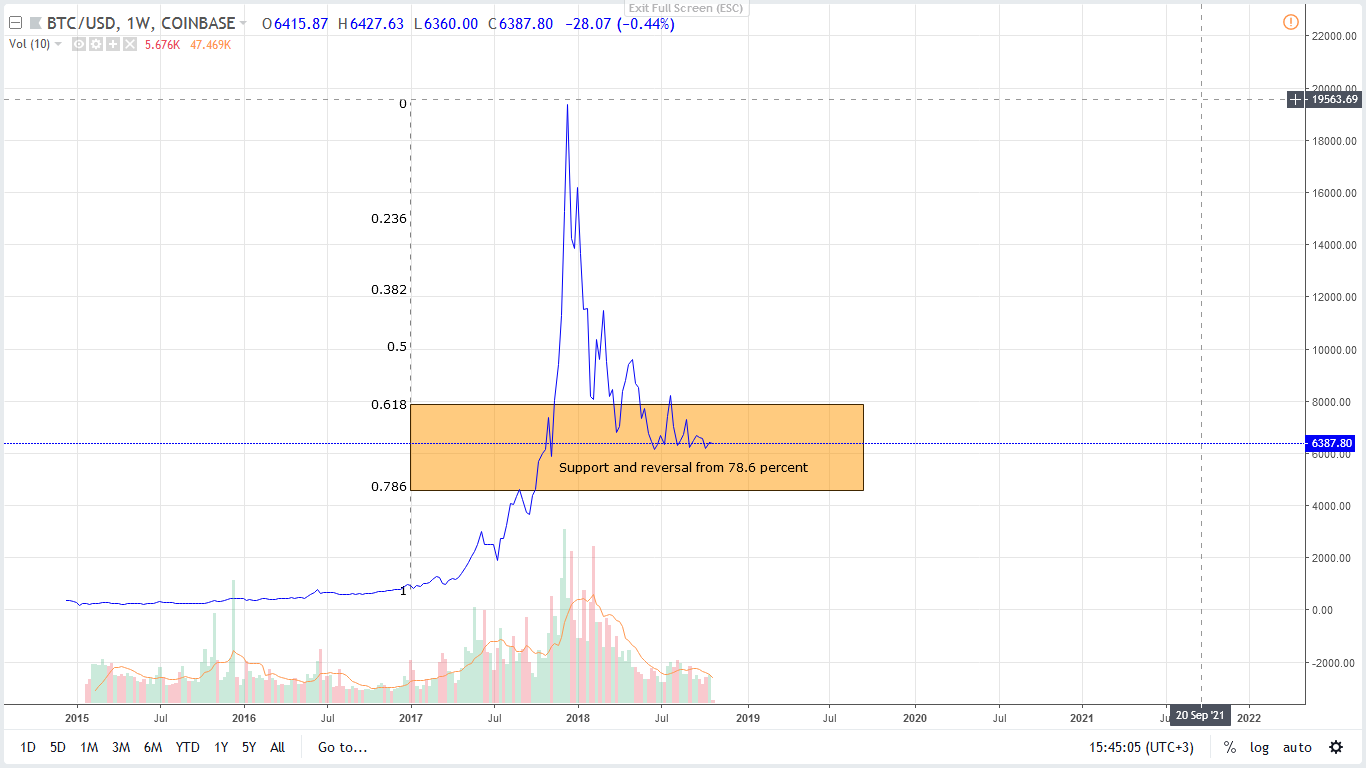 Will Bitcoin’s $100b psychological support line has held all year. Will it continue to hold?

Coincidentally, BTC is finding support from around the 78.6 percent Fibonacci retracement level which flush well with the $6,000 mark. It may seem haphazard but this is pure human behavior at play and in show way align itself with Wyckoff trading styles. Therefore, if we extend the rules and paste a Fibonacci extension tool, then it’s clear that BTC might print the $12,000 and $15,000 mark by EOY.

Mining gear and electricity is expensive and miners are not yet at break even. Because of this, there is a bit of undervaluation of BTC prices meaning the only direction is up. When Bitcoin prices were vibrant, miners didn’t care much about the BTC fluctuation—Bitcoin volatility Tracker points to stability, but now it is the main concern. The entry of Bitmain competitors plays a part and with nomadic mining, farms are set up in areas where energy costs are favorable.

Assuming you mine with a single Bitmain S9 miner at $0.10 KWH, your will still be in the red (-$29) one year in your career. This might shake you out but goes on to show why prices need to rise for the BTC ecosystem to flourish.

The SEC is due to give a node on Bitcoin ETF but the wheels are in motion. The White House is concerned about  Chinese influence on Bitcoin mining as they fear they can weaponize the network. Whether they will encourage users to pull out of BTC to pre-mine we are not sure but should they take initiative to strengthen or even open hallways for American investment like they have done by allowing Bakkt to list Bitcoin Futures in December, then it’s evident that the market is headed to the right direction. We might even see the approval of Bitcoin ETF and there after the psychological $100 billion Bitcoin market cap will surely hold.