Tether (USDT-USD) is the largest and most well known stablecoin; or a cryptocurrency pegged to the value of a large fiat currency, in this case the US Dollar. While it’s true that Tether operates on Omni chain, which is built on top of the Bitcoin (BTC-USD)(COIN)(OTCQX:GBTC) blockchain, that does not mean that you can trust it. So, how does Tether keep the value of one USDT at $1?

Tether claims that all USDT are backed 1:1 by US Dollars. Tether uses arbitrage across exchanges to make it happen.

Number 1 is the primary source of concern, as many have called it into question.

What is the purpose of Tether?

According to the Tether homepage, Tether is “Digital money for a digital age.” But, let’s be serious; people only use Tether because they want to avoid using US Dollars. You see, some exchanges are too shady to deal in USD because they would have to comply with pesky FINcen standards like KYC/AML, and if they did that people would have to pay their taxes. Legitimate exchanges let customers deal directly in USD, and why wouldn’t you?

If you’d like a quick primer, this video explains what a stablecoin is.

A short history of Tether

Tether was created in 2014 by Brock Pierce. Yes, the same guy from the John Oliver segment who was involved in the founding of EOS(EOS-USD).

For fun, Google (GOOGL) “Brock Pierce Scandal” and see what comes up. Moving along…

The official white paper uses the term “audit” 30 times. Unfortunately, they have never had a full, official audit by an accounting firm.

In 2017, they lost their banking relationship with Wells Fargo. The Paradise Papers leak showed that Tether shared several founders from the dubious Bitcoin exchange Bitfinex.

In 2018 Tether broke up with their auditor, Friedman LLP. A “non-financial” audit was completed by a law firm, but this effort was misleading at best.

First off, the report is not an audit. It was prepared by a law firm – Freeh Sporkin & Sullivan, LLP – not an accounting firm.

That’s not for lack of trying, according to Stu Hoegner, Tether’s general counsel.

“The bottom line is that an audit cannot be obtained,” Hoegner told CoinDesk, claiming that this problem is not unique to his company but one faced by the entire cryptocurrency industry.

“The barriers to getting audited are simply too big to overcome right now, and not just for us.” – Coindesk

Worse, some have suggested that the owners of Noble Bank are also the Owners of Tether.

Just this week news started circulating that Tether’s Bank, Noble Bank was desperate for cash and another report from Bloomberg said Noble was seeking a buyer.

As of today there are 2.8 Billion Tether circulating, a ticking time bomb.

Some cryptocurrency exchanges do not take the time or effort to separate their USD volume from their USDT volume. This is terribly misleading. The reason it’s happening is that if you’re running an exchange and you want to get more visibility, you simply allow free trading, connect in Tether and then just trade “Billions” with yourself to boost your ranking. Presto change-o, now you’re the top exchange!

So, how much volume is faked in this way? According to Bitfinex’ed earlier this year it’s over 83%. 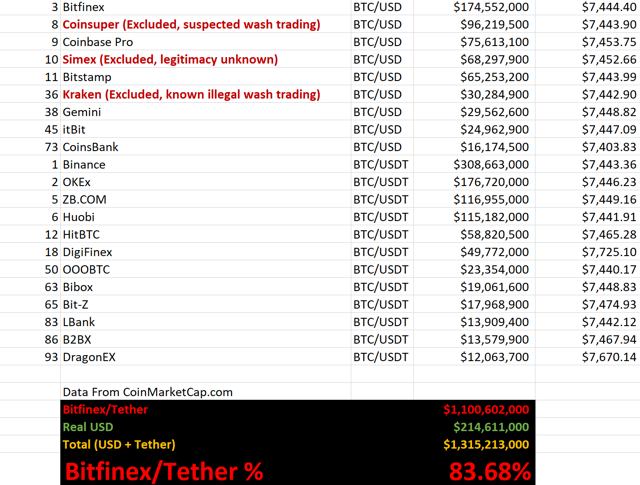 Others have placed the fake volume even higher. Sylvain Ribes showed that as much as 93% of volume on exchanges might be fake on exchanges such as OKex.

How to play the coming Tether Collapse

When Tether does finally get shut down, or when the coin loses its peg, it’s going to be utter chaos on the surface. You should brace yourself now for the tsunami of articles claiming Bitcoin is toast and all cryptocurrencies are done for.

In reality, the on chain activity of many cryptocurrencies bottomed out months ago. The activity that happens on these exchanges is simply white noise to the underlying protocols.

On the day that Tether unravels, a huge and volatile cryptocurrency sell-off will begin. Don’t panic, and maybe don’t even make a move right away. Remember, looking at the past, market bottoms are generally long and quiet. You’ll have many opportunities to get in, just be patient.

Tether is a blight on the cryptosphere, and once the blight has passed a new era of cooperation between large investors and the cryptocurrency space will begin. Remember that Bakkt is launching next month. The reason we haven’t had an ETF yet is because of scams like Tether and the massive tangle of fraud and scams that they facilitate.

As the saying goes, “This is good for Bitcoin.” Just remember I told you this was coming. Lastly, remember that if you want to know if Bitcoin is actually dead, you need to read this article.

Unbacked stablecoins like Tether, zero-fee trading and 100x leverage form the fake volume trifecta. For cryptocurrencies to reach mainstream adoption, we have to get these scams out of the…