The Bitcoin and cryptocurrency ecosystem is far and wide as it’s 24/7 global economy. Literally anyone in the world can buy and hold Bitcoin in 1 or multiple Bitcoin addresses.

A new report released by the Chainanalysis research firm shows that the Bitcoin blockchain consists of 460 million addresses as of December 2018. Each address has the capability of storing, sending, and receiving Bitcoin.

However, data gathered from Chainanalysis reveals that out of the 460 million BTC addresses, only 37% (172 million) of these addresses are economically relevant. What this means is, individuals and services that own Bitcoin control only 37% of BTC addresses.

Another interesting statistic, out of the 172 million economically relevant BTC addresses, just 27 million actually hold Bitcoin. Plus out of these 27 million addresses, there’s no telling how many one single individual or entity controls as any user can be in control of multiple BTC addresses.

However, the report showed that out of the 37% of all economically relevant BTC addresses, a whopping 86% (147 million) of those addresses belong to a named service such as an exchange or darknet market.

The report also delved into how many of the Bitcoin transactions in the network have real economic value, with Bitcoin transferred to and from other economically relevant BTC addresses.

As stated in the report:

We estimate that on average only 20% of the Bitcoin transaction value is economic, in that it is a final transfer between different people via economically relevant addresses.The remaining 80% is returned as change.

To back this last statement up, Chainanlysis provided a chart showing the period between August and October 2018, where users executed roughly $41 billion of transactions and only $9 billion of them had real economic value. 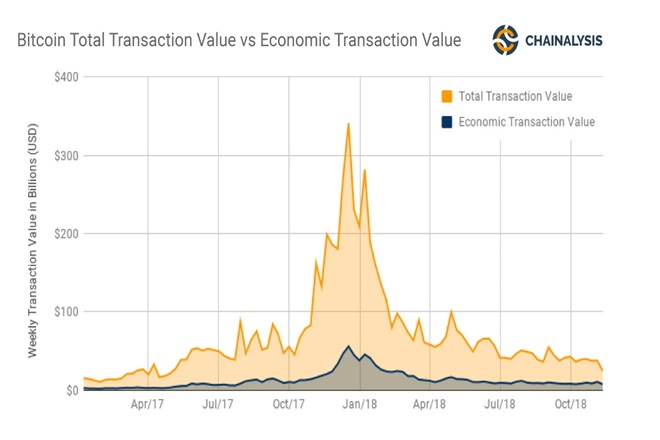 By inspecting the available metrics including transaction volume and the number of addresses, we’re able to grasp a better understanding of how healthy the network really is.

It’s clear we still have a long way to go before mass adoption and we can use this in-depth blockchain analysis to track real progress, rather than inflated progress.

Another example of inflated statistics in the cryptocurrency markets is the data reported on CoinMarketCap. As previously reported, over 80% of the top 25 BTC pairs on CoinMarketCap are wash traded, which grossly inflated false trading volume.

While the statistics brought to light here may be unsettling, it’s important to acknowledge them so the Bitcoin and cryptocurrency ecosystem can improve, and improving it is.

Going into 2019, there are numerous key crypto developments to look forward to. The industry is maturing and people are increasingly aware of the problems that need fixing.

The space will see more transparency as governments introduce regulations and when they legitimize the industry.

How do you think the industry will mature going into 2019? Will we see greater adoption and growth among economically relevant BTC addresses? Let us know what you think in the comment section below.

More From Our Partners