Bitcoin investors have been hodling

As the stock market gyrates wildly, Bitcoin remains surprisingly sedate—and one reason may be that some of its biggest holders are proving to be buy-and-hold investors.

Nearly 10% of Bitcoin wallets, including one that ranks seventh among all of the largest wallets, hasn’t had any activity in a year, according to data from bitinfocharts. The number of dormant wallets has nearly doubled to 15.8 million in this time.


prices have plunged more than 50% so far this year, the digital currency has held to a tight range on either side of $6,500 for the better part of two months, and despite its biggest drop in nearly three weeks on Tuesday, the move hasn’t unleashed a wave of selling.

“Holding Bitcoin in the store of value thesis has become a popular narrative recently,” said Anthony Pompliano, founder and partner at Morgan Creek Digital. “[It’s] highly likely that people are buying into the narrative.”

The 100 largest dormant wallets accounted for 9.4% of all Bitcoins. A dormant wallet is one that has not had any activity, in or out, over a set period—in this case, one year.

These owners are colloquially known as Bitcoin whales due to the magnitude of their holdings and ability to move the price of the world’s largest digital currency. 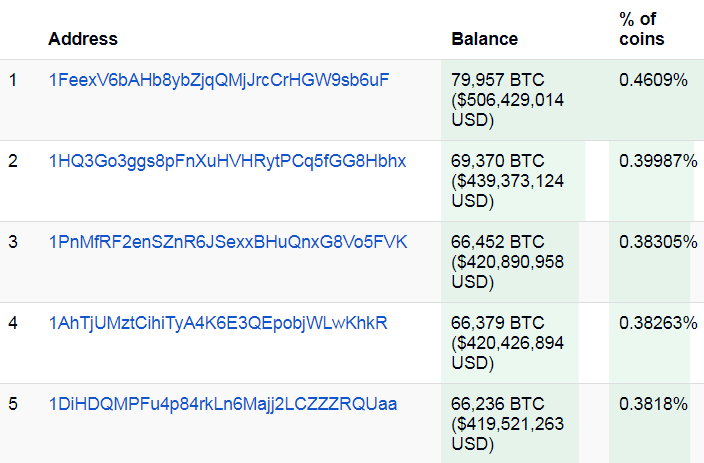 Read: What’s more volatile than Bitcoin? You may be surprised

Pompliano said that with the focus firmly on the stock market, Bitcoin has stayed out of the headlines. “The less media hype, the less people are constantly thinking about their holdings. Less thinking about their portfolio leads to less activity. This is the psychology argument,” he said.

Since Oct. 16, the beginning of the Bitcoin lull, the Dow Jones Industrial Average