Bitcoin’s epic 2017 bull run was at least partly inspired by interest in Bitcoin, cryptocurrency and blockchain from the world’s biggest banks and financial institutions.

This year it was the turn of tech companies to boost Bitcoin. After falling sharply in 2018, the Bitcoin price rallied hard in the first half of 2019 due to tech companies from social media giant Facebook to iPhone-maker Apple eyeing Bitcoin and crypto.

“Yes, only [bitcoin],” Schulman told Fortune magazine in response to being asked whether he holds any cryptocurrencies.

Schulman’s attitude to Bitcoin and crypto reflects the wider market, with many increasingly confident Bitcoin will remain the largest and most popular cryptocurrency.

Bitcoin’s dominance, its value compared to the whole cryptocurrency market, has risen this year as so-called altcoins are sold off. Bitcoin dominance now sits at around 65%, up from around 50% at the beginning of the year, according to CoinMarketCap data.

Schulman, who was speaking to the magazine after he pulled PayPal out of Facebook’s troubled libra cryptocurrency project, also confirmed earlier reports the company has teams working on blockchain and cryptocurrency.

“We think there’s a lot of promise to blockchain technology,” Schulman said. “It’s intriguing to us, but it really needs to do something that the traditional rails can’t do.”

“On the crypto side, it’s still very volatile, and therefore, we don’t have much demand for it by merchants because merchants operate on very small margins.

“That doesn’t mean that I don’t think crypto is an interesting idea … more commodity-like than it is cash-like right now. But you can think of use cases in different countries and different places where it can be more stable than the alternatives.”

Many in the Bitcoin and cryptocurrency industry were excited by Schulman’s revelation, taking it as an endorsement of Bitcoin and its potential. 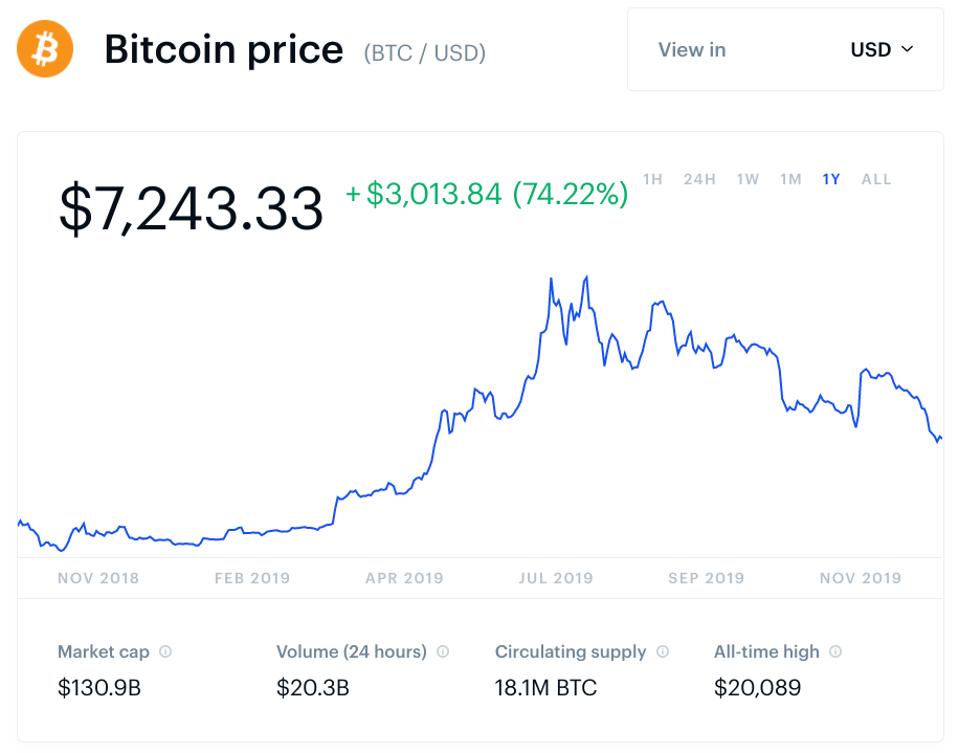 The Bitcoin price was sent sharply higher this year as some of the world’s biggest technology … [+] companies began to develop their own Bitcoin rivals.

In June, PayPal was revealed to be one of Facebook’s 28 founding members of the Libra Association but the company backed out in October along with payments rivals Visa, Mastercard, and Stripe.