Bitcoin and cryptocurrency traders and investors have cheered Bitcoin‘s more-or-less positive start to 2020—though the situation could be more bearish than some think.

The Bitcoin price has added around $2,000 per Bitcoin since January 1st, with Bitcoin now hovering around $9,000.

However, Bitcoin trading volume has continued to struggle and now data shows troubled Finland-based peer-to-peer Bitcoin exchange LocalBitcoins has seen the number of Bitcoin traded across its platform fall to a seven-year low for the week ending February 22.

Bitcoin trading volumes have been falling for the past year, with many concerned the long-term … [+] decline in trading could mean Bitcoin is heading for a bear market.

Towards the end of February, LocalBitcoins traded just 3,144 Bitcoins—its lowest weekly trading amount since May 2013, according to Bitcoin statistics website Coin Dance, and down around 75% on the same period last year.

“Some of the volume variations are due to the level of activity of the Bitcoin market itself but our service already expected that the regulatory changes that occurred during 2019 would have an impact on the platform,” Veruska Xavier Filgueira, content and communications representative at LocalBitcoins told industry news site Cointelegraph, adding Bitcoin trading volume in dollars is similar to those that the platform had in early 2017 “on average.”

LocalBitcoins saw some 13,000 Bitcoins traded per week in February 2019, Coin Dance records show, with its biggest ever trading week, of around 40,000 Bitcoins, back in 2015.

The fall in LocalBitcoins trading volume to a seven-year low comes after reports it suddenly began suspending long-time users’ accounts without warning earlier this year.

Bitcoin trading volume on the Finland-based LocalBitcoins has plummetted since 2015, according to … [+] data from Bitcoin stats site Coin Dance.

Some reports suggested the suspensions were a result of strict new European Union anti-money laundering regulations that came into effect in January, requiring Bitcoin and cryptocurrency platforms and wallet providers to identify their customers.

However, LocalBitcoins, which has a reputation as being a relatively anonymous way for Bitcoin users around the world to buy and sell Bitcoin, claimed to have complied with the new legislation early last year, giving it ample time to verify users’ identities ahead of the changes taking effect this month.

The regulatory changes have been blamed for Bitcoin trading volumes on LocalBitcoins falling sharply in recent months. 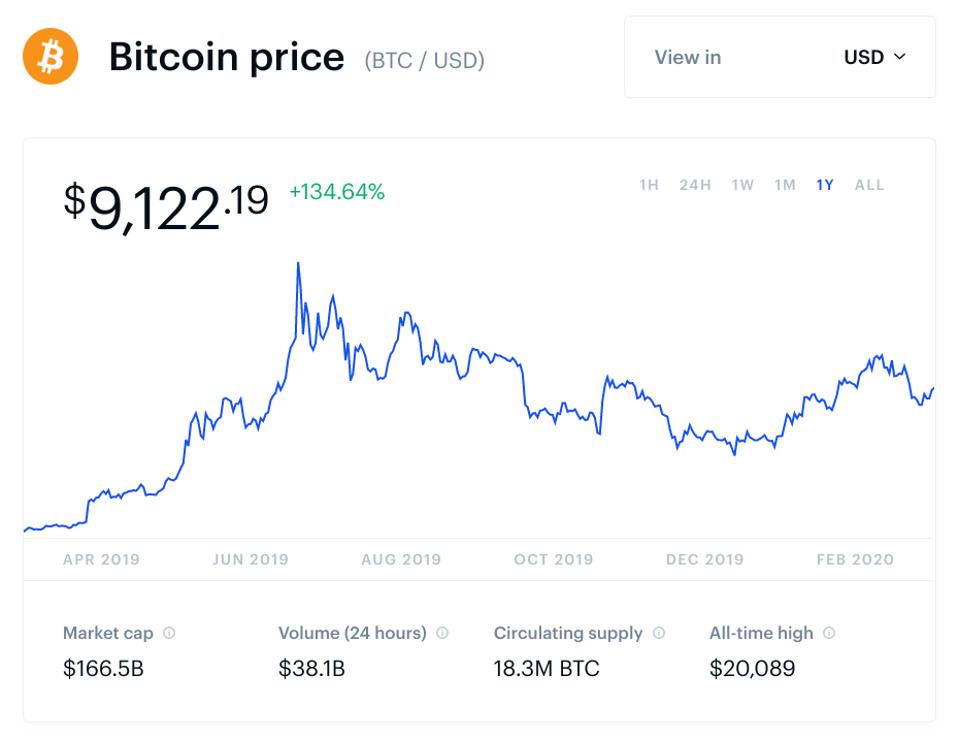 The Bitcoin price has had a strong start to the year but its rally stalled last week with the … [+] Bitcoin price dropping below the psychological $10,000 level.

In January, crypto analysts warned Bitcoin trading volume is now at its lowest since April, with volume down 90% from its June 2019 high—and when volume is low markets are more likely to make sudden, volatile moves.

However, there are a number of upcoming events in 2020 that could see Bitcoin interest return to levels seen last year, including the launch of crypto platform Bakkt’s Bitcoin-buying app and Bitcoin‘s May halving—when the number of new Bitcoin rewarded to miners will be halved.