Monday, October 1: crypto markets today are shaky and largely red, with Ripple (XRP) losing the most among the large-market-cap coins and most altcoins hit with modest losses on the day, as data from Coin360 shows.

Bitcoin (BTC) is down just over half a percent on the day, trading around $6,550 as of press time. Following an intra-week high of $6,783, the top coin has seen depressed price performance, dipping as low as $6,500 before recovering back to trade range bound around $6,600.

On its weekly chart, Bitcoin is around 0.28 percent in the red. Monthly losses are however pushing a stark 9 percent. 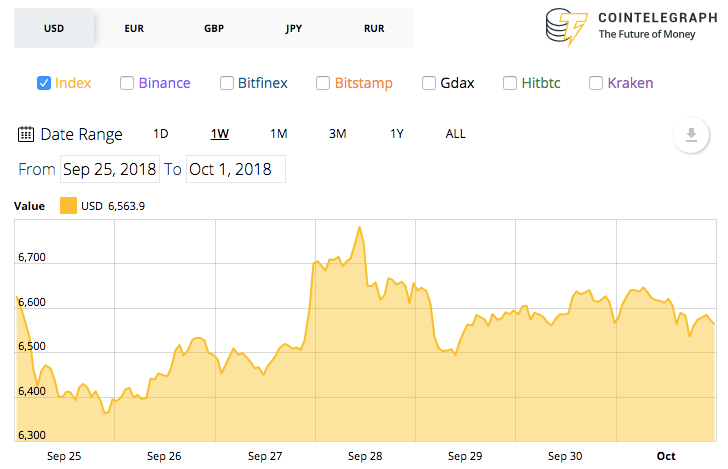 Ethereum (ETH) is down somewhat more, losing about 1 percent on the day to trade at $229 at press time. After sustaining losses September 25-29 to briefly trade as low as $207, the leading altcoin has seen a strong couple of days, pushing above $235 September 30.

Ethereum’s market cap is around $23.4 billion, sustaining its just margin ahead of Ripple (XRP), which today has a market cap of $21.96 billion.

On the week, Ethereum’s gains remain in the green by a scant 0.89 percent; monthly losses are at around 22.20 percent. 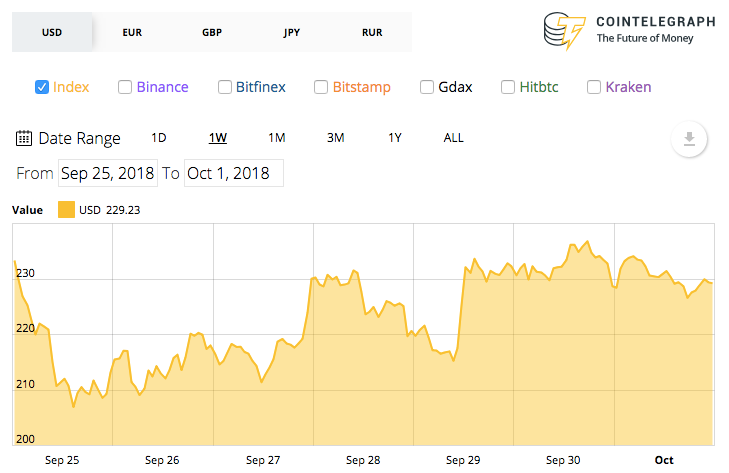 Ripple (XRP) has seen the heftiest losses among the top twenty coins on CoinMarketCap, shedding 4.44 percent on the day to trade at $0.54 as of press time.

Nonetheless, after the asset’s unprecedented September growth – which saw it briefly outflank Ethereum to claim the second spot ranking on CoinMarketCap listings – Ripple’s weekly chart is still 14 percent in the green. On the month, Ripple is up a whopping 65 percent. 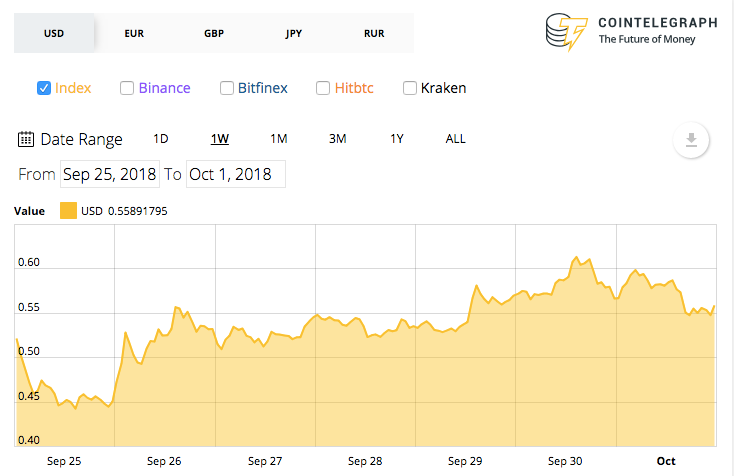 The remaining top ten coins listed on CoinMarketCap are seeing mixed minor gains and losses capped within a one percent range.  Stellar (XLM) – up 0.5 percent – is the only outlier; perhaps slightly buoyed by news that StellarX, a Stellar-based decentralized crypto exchange, left its beta phase and went live September 28.

In the context of the top twenty, most 24-hour changes are similarly small, capped below 2 percent, with a few exceptions. NEM (XEM) is up a strong 6.33 percent on the day, decoupling from the wider lacklustre market, even as it saw a similar dip to other assets in recent days. 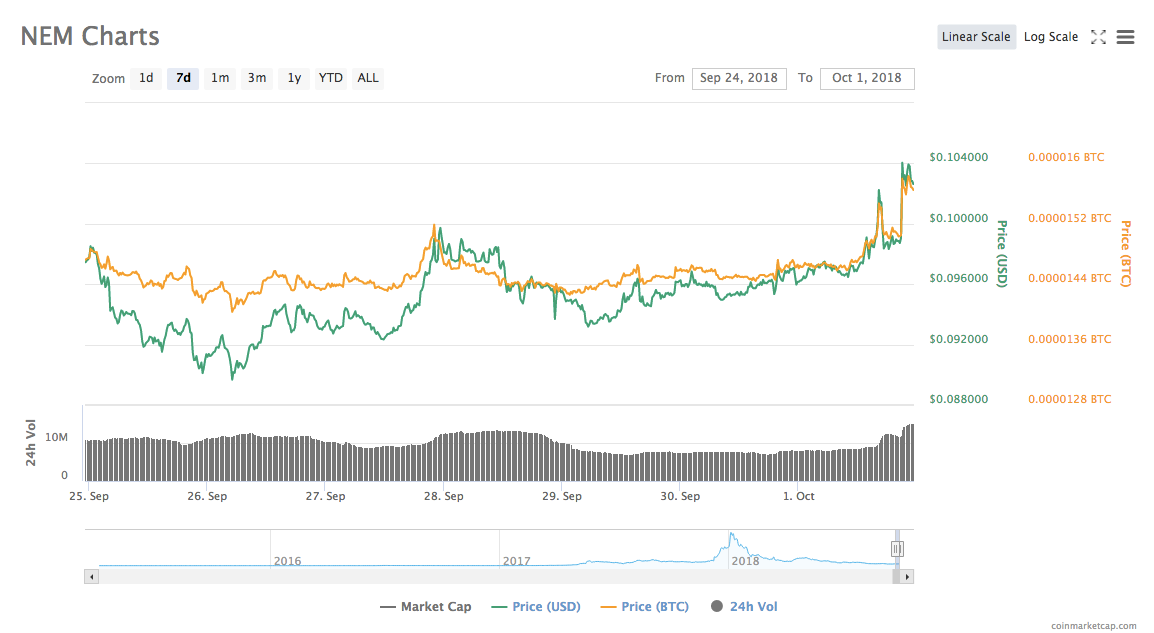 At the other extreme, Tezos (XTZ) is down 5.45 percent on the day to trade at $1.35, with its weekly chart showing an unabated price decline. Dogecoin (DOGE), for its part, has been spared a price dent, but has sealed a scant 0.43 percent growth on the day to press time.

Total market capitalization of all cryptocurrencies is around $221 billion as of press time, down around $5 billion from its intraweek high of just over $225.9 billion. 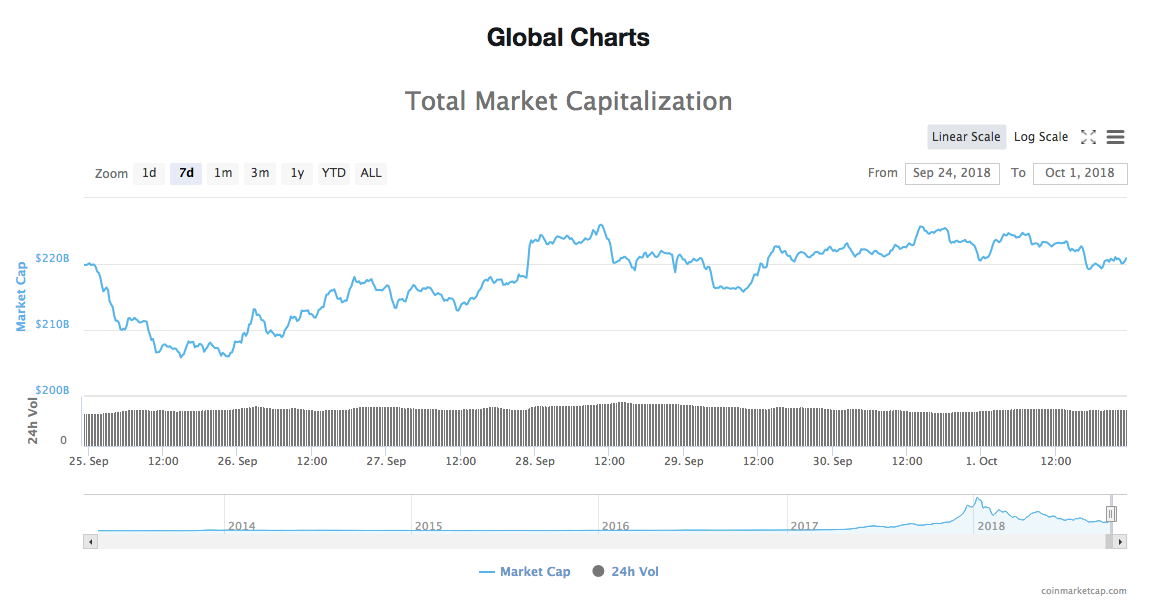 Despite irresolute markets, some bullish crypto headlines have broken this week. In a speech addressed to the general debate of the 73rd Session of the General Assembly of the U.N., Malta’s Prime Minister argued that cryptocurrencies are “the inevitable future of money,” and said that blockchain will transform the gamut of political, civic, and corporate systems.

In China, against a backdrop of stringent anti-crypto regulations, stalwart tech media publication Beijing Sci-Tech Report (BSTR) announced this weekend it would be offering subscriptions payable in Bitcoin. In response to queries about the BTSR move on social media, Chinese crypto news commentator cnLedger underlined the fact that by doing so, the publication was not breaking the law, as “owning and investing” in crypto is not officially illegal.