Isaiah Jackson, the author of ‘Bitcoin and Black America,’ shares with me the story of how he found a solution with the new digital currency that originated in 2009 with the age-old problem of money, power, and racism in the United States of America. Unapologetically, Jackson, at one point in discussing how local currencies for Black communities would be more beneficial than the U.S. dollar, clarified his answer by saying, “Leave us alone. I don’t know how more bluntly to put it.”

Talking to Jackson, I realized quickly just how much thought he has given all this. When I referenced how the greenbacks were produced in 1861 as a way to raise money for the North in Civil War, he broadened the discussion to include the Wildcat Banking era, a time when numerous types of currencies existed. He also expressed that he believes that the Federal Reserve System, created in 1913, was not the right direction for America, as Jackson explains how much value the dollar has lost since that time.

Amid discussion of what Jackson characterizes as a racist banking system, we delved into the concept of redlining, where banks would in the past literally draw red lines around communities that they wanted to avoid making loans. Jackson provided a picture of the present and future potential for ‘digital redlining’ where coding in algorithms with emerging technologies like AI could produce the same results.

Finally, the highlight for this interview came when our discussion turned to the horrific irony aspect of how George Floyd’s arrest was over a counterfeit $20 bill. From the bill that pictures President Andrew Jackson on it, time will tell as to whether in the future a $20 bill with Harriet Tubman on it will be more or less common than Bitcoin in digital wallets for Black communities across America. For now, I present to you Mr. Jackson, author of ‘Bitcoin And Black America,’ who offers a new FinTech take on a solution for Black economics.

Isaiah Jackson on his Book Tour for ‘Bitcoin And Black America’ at Howard University.

Jason Brett: You put two concepts together, Bitcoin and Black America, well before these riots started. Can you tell our readers a little bit about what brought you to the conclusion that your book needed a title like this and what you are trying to say.

Isaiah Jackson: So the Black America part, which is my community, for a long time, we have been distressed economically and there have been a number of solutions that have come about in our community that have not worked because we have the same median income as we had in the 60s. In my opinion, we need something totally different and don’t need to keep talking about the same solutions over and over. Bitcoin has only been around the last 11 years. One of things I wanted to do was look at the circular economy that can happen with Bitcoin and apply it to the circular economy the Black community should have. Just providing solutions for us to have leverage in a system where we have not had leverage before. We don’t have money usually to convince Members of Congress and we don’t have leverage to keep out the police violence we have seen recently and that was the motivation to write the book initially. Going forward I want to make sure people have at least the option to have Bitcoin and to be economically successful.

Brett: Are we getting ahead of ourselves if we talk about Bitcoin or Digital Dollars before we’ve figured out how to increase broadband access in urban and rural areas? Without that connectivity it creates a digital divide. Is that a barrier and should the U.S. be working on developing infrastructure to solve this?

Jackson: As someone who has lived in urban communities where the phone service is poor, [I can tell you that] the phone service is worse in Black neighborhoods that are poor. Unfortunately that is a thing and the digital divide does exist. A lot of people with phones don’t have laptops, but the good thing about Bitcoin is that you can use Bitcoin with just a phone and even in countries such as Nigeria and others that may not have that much tech, they have a surplus of phones. You can use Bitcoin instantly and you don’t have to be very tech-savvy- just enough to download an app. The digital divide exists but Black people are very resilient and will find a way. If there is a solution to the problem, there won’t be any sort of vibe that stops us. 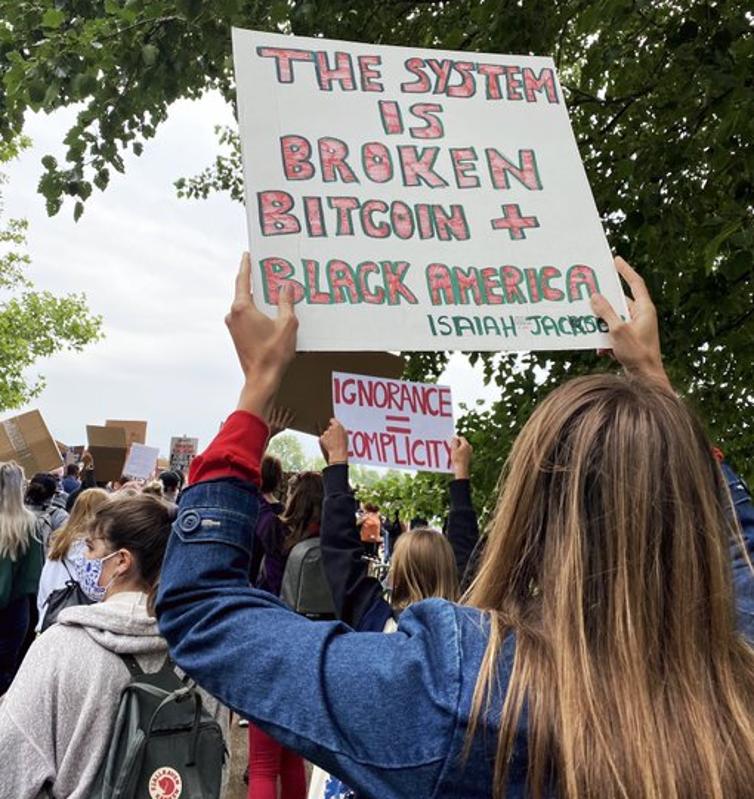 Picture of protester at a Black Lives Matter protest after death of George Floyd holding a sign, … [+] “The system is broken Bitcoin + Black America”

Jackson: Yes, and I believe it’s more not trusting banks by older Black people. I know a lot of my relatives and others have kept money in the mattress to save…