The nearly-indestructible honey badger, famed for its ability to endure venomous snakebites, is Bitcoin’s animal mascot for a good reason. Over the years, Bitcoin has survived so many technical attacks, so much internal strife, and so much outside criticism that it’s gained a reputation for antifragility. This term, coined by economist Nassim Taleb, is used to describe something that thrives in adverse conditions:

“Some things benefit from shocks; they thrive and grow when exposed to volatility, randomness, disorder, and stressors and love adventure, risk, and uncertainty…Antifragility is beyond resilience or robustness. The resilient resists shocks and stays the same; the antifragile gets better.”
– Nassim Nicholas Taleb

From this perspective, perhaps the surest way to kill Bitcoin would be to stop challenging it. However, in a world of fiercely competing currencies—fiat, altcoins, and precious metals—such destructive tranquility seems unlikely. For the foreseeable future, anticipate further attacks and “Bitcoin is dead!” declarations.

Attacks on Bitcoin: Past, Present, and Future

A few months ago, Reddit user themetalfriend compiled a fairly comprehensive list of attacks on Bitcoin. In case you’re wondering about the “Outcome” column, “HBDGaS” stands for “Honey Badger Don’t Give a S#!%,” referencing a viral video about the animal’s survivability.

While different categories or additional attacks could be proposed, the list effectively conveys the wide variety of attacks that Bitcoin has endured—as well as some potential future threats.

There are three broad categories of attack, with significant feedback between them:

Attacks to slow Bitcoin adoption are primarily targeted at users and the user experience. Cryptocurrencies live or die by their network effects; their utility—and hence, their value—is predicted by the square of their users. By slowing Bitcoin adoption, rivals from both inside and outside the crypto sphere can advance their own currencies.
Attacks to degrade Bitcoin infrastructure target network nodes, miners, and their underlying hardware or software. By slowing or disrupting the network and driving up fees, rivals worsen the Bitcoin user experience, which damages the economy and slows adoption. Such attacks also divert developer resources from improvement.
Attacks to slow Bitcoin development target Bitcoin developers directly or target their development process. This has the effect of slowing upgrades, which in turn slows adoption. Such attacks may also damage developers’ ability to respond to infrastructure attacks.

As you can see, even though there are three different categories, in the end, they’re all connected in their outcomes. Let’s consider these specific attacks in greater detail, including known examples and their counters.

8 Ways to Killing Bitcoin by Slowing Down Its Adoption

When authorities pass and enforce legislation against Bitcoin, the ultimate effect is the punishment of users. The list correctly notes that Bitcoin has survived several outright bans by small countries (namely Afghanistan, Algeria, Bangladesh, Bolivia, Ecuador, Morocco, Macedonia, Vanuatu, and Vietnam). In fact, such bans have gone largely unnoticed outside of these places.

However, any prohibition by large, systemically important countries or major powers (the United States, the European Union, China) has yet to occur. The closest example of a ban by a major nation would be Russia, where Bitcoin’s legal status appears to be in a constant state of flux.

Numerous false reports of bans by large countries, notably China and South Korea, have been known to cause price drops, sometimes significantly. However, a low “bargain” price may spur adoption in other countries, so compensatory forces likely exist across the market. Low prices may hurt holders, but it’s possible they spur adoption too. It should also be remembered that even at a suppressed price, Bitcoin still works.

Can Bitcoin be Banned?

While nations may discourage the use of Bitcoin by prosecuting known users, any ban on citizen interaction with the network would be technically unenforceable. Blockstream satellites currently broadcast the blockchain to the Americas, Africa, and Western Europe and will soon cover the entire globe, so a fairly inexpensive satellite setup can still receive blockchain data even if it’s scrubbed from a nation’s internet (as part of a country-wide filtering of Bitcoin traffic).

As for sending transactions to the blockchain, multiple stealthy methods exist: over Tor, via SMS, within an encrypted email or other text message, or even using steganography to encode transactions within seemingly-innocuous digital files. 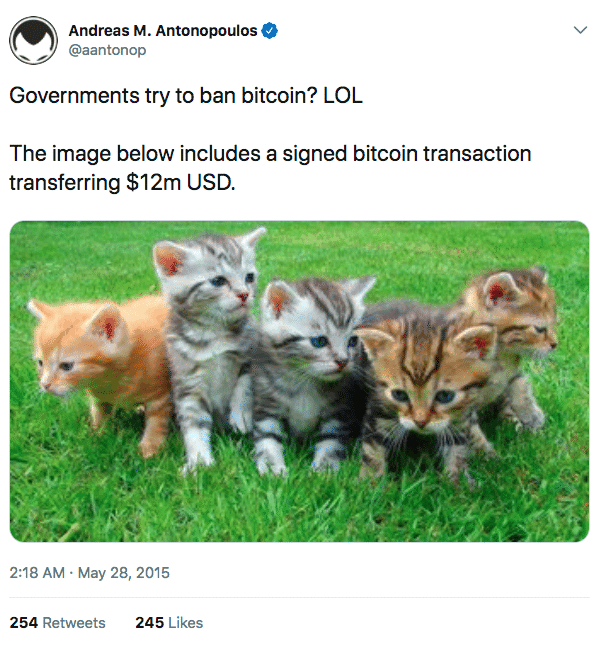 According to Andreas Antonopoulos, this image of cute kittens hides a 550,000 BTC transaction.

Thus, banning Bitcoin would be a losing game of whack-a-mole for…