Bitcoin investors have nervously watched markets over recent weeks, with some senior figures in the Bitcoin community warning confidence has “evaporated.”

The Bitcoin price has swung wildly along with traditional markets since the coronavirus COVID-19 began spreading out of China, dropping to lows of under $4,000 per Bitcoin from almost $10,000 in early March.

Now, despite Bitcoin dropping by some 30% over the last 30-day period, survey results show Bitcoin investors were upbeat at the beginning of the year, with most expecting the Bitcoin price to soar to over $20,000 per Bitcoin in 2020.

Bitcoin investors are confident Bitcoin, by far the most valuable cryptocurrency, will see a fresh … [+] all-time high this year–though most don’t expect ethereum, the second most valuable digital token, to do so.

The Bitcoin price has fallen by some $2,000 since the survey was carried out, hit hard by the broader market sell-off sparked by the spreading coronavirus.

Bitcoin sunk to lows of under $4,000 earlier this month before bouncing back to trade over $6,000 and remains highly volatile. 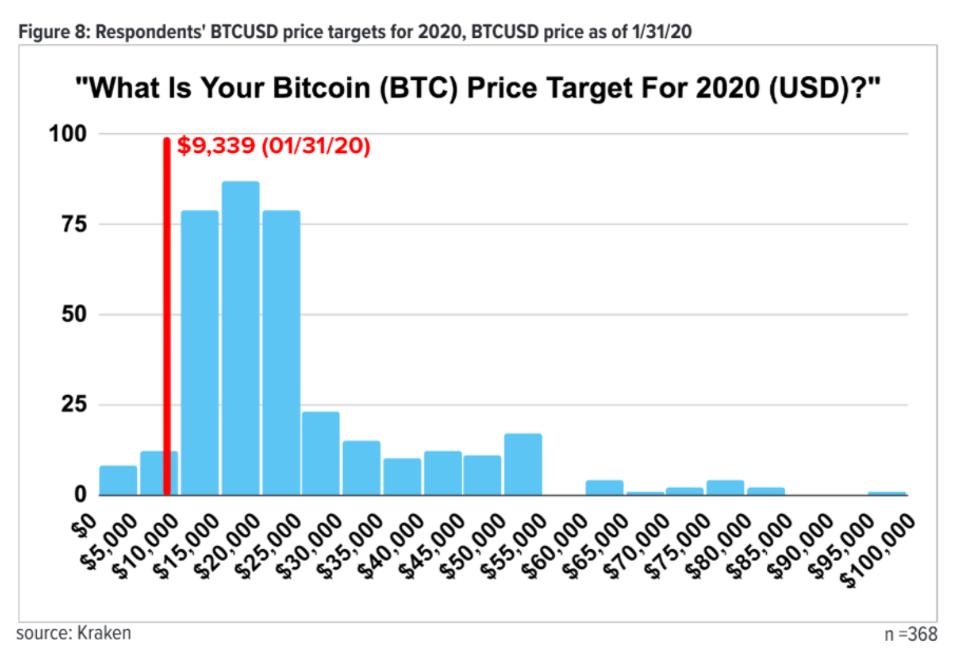 Ahead of the Bitcoin price plunge earlier this month, many of Kraken’s biggest users expected the … [+] Bitcoin price to hit all-time highs later this year.

However, the outlook for altcoins is less rosy with only slight more than half (54%) of respondents expecting a so-called alt season this year.

Traders don’t see ethereum, the world’s second most valuable cryptocurrency returning to its all-time highs this year, with an average price target of $810, also see new highs—down from ethereum all time highs of over $1,000 in late 2017.

Elsewhere, market sentiment was mixed. A majority (44%) of respondents saw the market as bullish, though 34% were undecided and 22% felt it was in bear market territory.

Bitcoin and crypto traders also failed to find common ground as to what will push the market forward this year.

“Adoption” was cited by 19% of respondents, while Bitcoin’s upcoming halving was named by 15%. Political “conflict,” “fear of missing out,” and economic “crisis” were also popular responses. 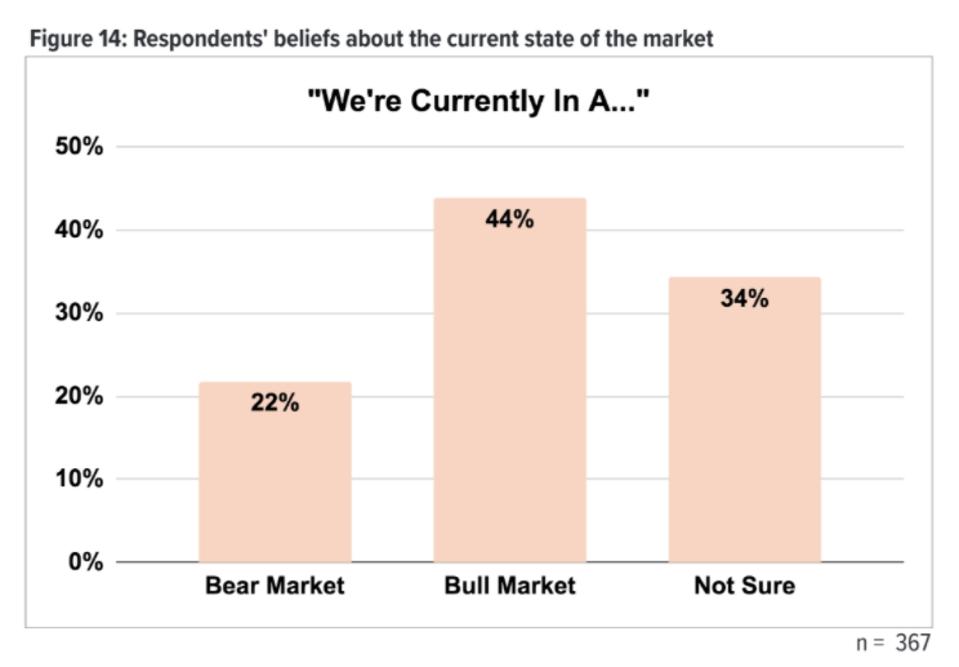 Most Bitcoin and cryptocurrency investors believe we’re now in a bull market though there’s little … [+] agreement, with many seeing the current market as bearish and others undecided.

The survey, carried out in late January, polled some 400 so-called VIP Kraken users, with 41% of respondents describing themselves as “investors,” 40% as “traders,” and 15% as “institutions”—the remainder was made up of “payment processors,” “crypto exchanges” and “miners.”

Meanwhile, nearly 50% of respondents said they expect the U.S. Security and Exchange Commission (SEC) to approve a Bitcoin exchange-traded (ETF) fund this year.

The SEC has rejected many applications for a Bitcoin ETF over recent years, meaning this latest ruling didn’t come as a surprise, though comments accompanying the ruling suggested the SEC might not green light a Bitcoin ETF for the foreseeable future.