Friday, Oct. 19: crypto markets are seeing minor losses across the board, as low volatility continues. The top 10 cryptocurrencies are seeing an equal amount of positive and negative fluctuations, but almost all very minor, capped within a 2 percent range, as Coin360 data shows.

Bitcoin (BTC) is down a little under percent on the day, and is trading at $6,470 as of press time. With one notable exception Oct. 15 – a brief spike correlated with Tether’s slight untethering from its dollar peg – the top coin has been trading sideways between $6,500-$6,500 for the past few days, before slipping below the $6,500 today, still above where it started the week, close to $6,300. 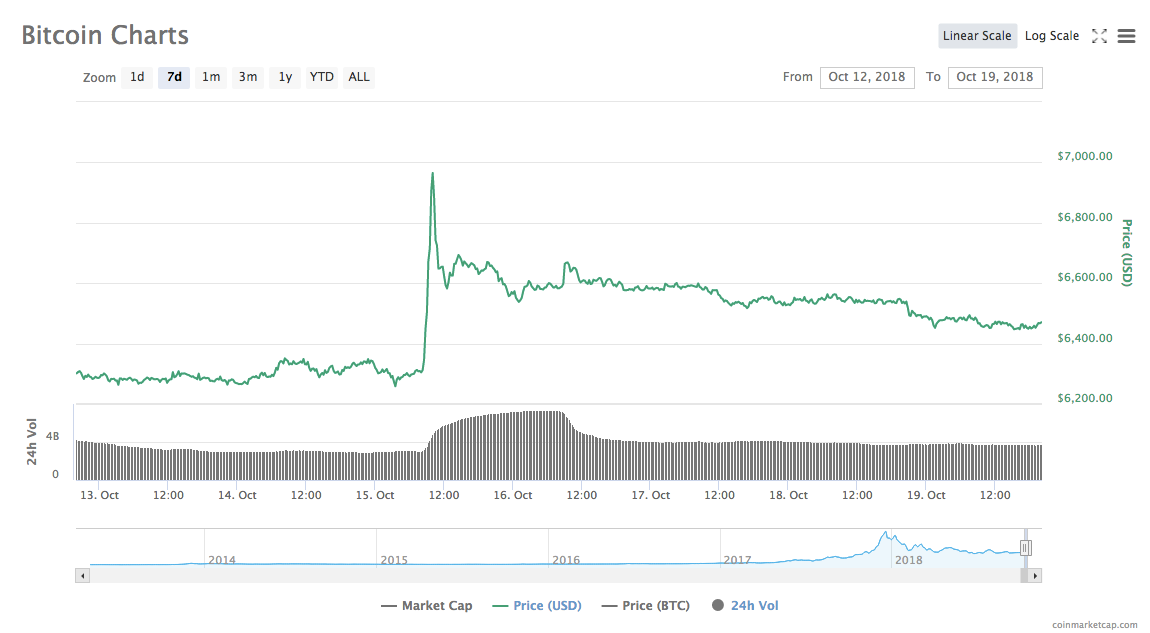 On the week, Bitcoin is 2.7 percent in the green, and is also up just about 2 percent on the month.

The market’s top altcoin Ethereum (ETH) is trading at a round $200 as of press time, seeing a negligible price change of just a fraction of a percent on the day. The second crypto by market cap saw a similarly sharp spike to Bitcoin on Oct. 15, reaching over $220, but has since corrected to trade range-bound between $205-210 over recent days, only just dipping to as low as $202 earlier today.

On the week, Ethereum is a solid 3.25 percent in the green; on the month the coin has lost about 2 percent. 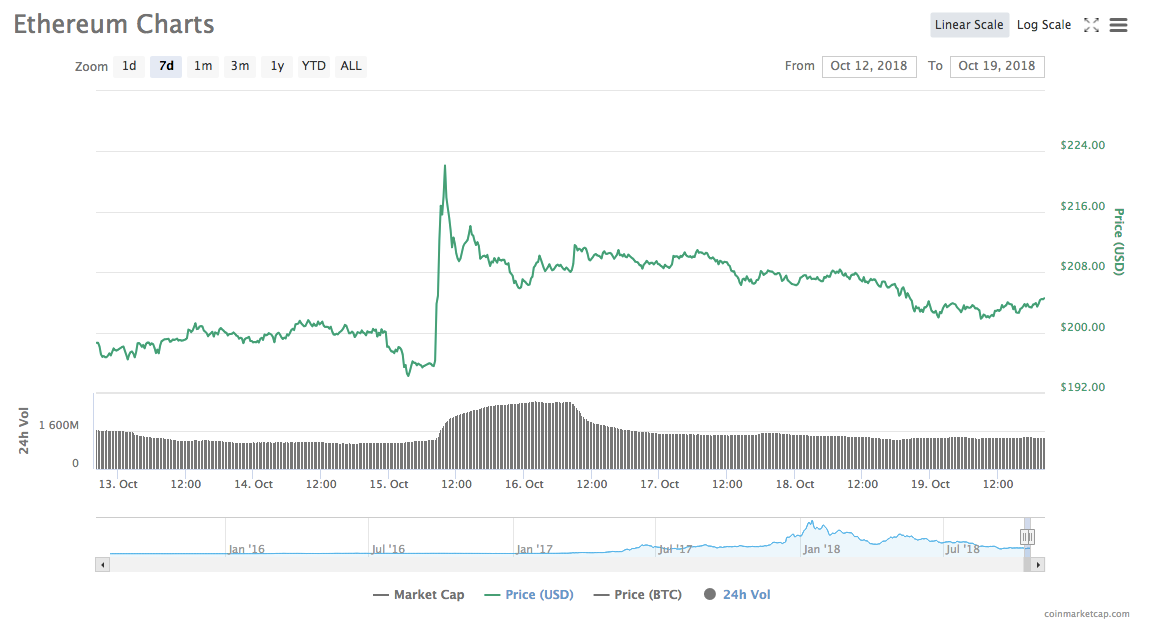 Of the top ten coins on CoinMarketCap, Stellar (XLM) is seeing the most price change over the past 24 hours to press time, up a solid 3 percent.

Litecoin (LTC) meanwhile has edged into the green, and is also up an above-average 1.48 percent on the day to press time.

Controversial stablecoin Tether (USDT) continues to grow to reclaim its peg to the U.S. dollar, trading at around $0.98 and up about 1 percent on the day. 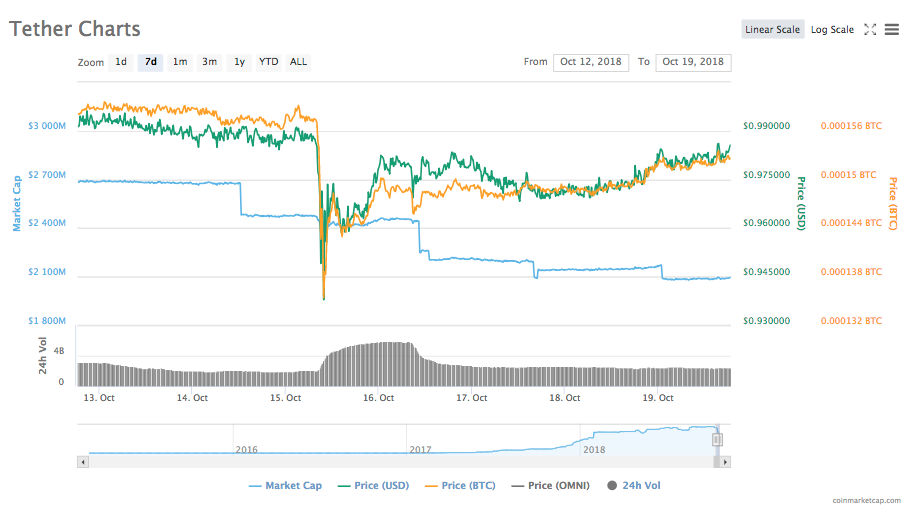 As controversy over the stalwart stablecoin continues to simmer, yesterday, crypto investor and entrepreneur Michael Novogratz said he thought Tether has not done “a great job in terms of creating transparency,” referring to the project’s offshore banking arrangements. By way of contrast, he favorably singled out the Winklevoss twins’ Gemini as an emerging stablecoin that has U.S.-based fiat reserves and New York regulators’ oversight.

In the context of the top twenty coins, the 11th-20th ranked coins are all in the red, with losses capped within a slightly higher 4 percent range, though most losses are also very minor. Zcash (ZEC), which yesterday saw soaring growth, atypical for the wider stable market, is today down 2 percent. It nonetheless retains its newly-won ranking as top 20 largest crypto by market cap, having dislodged Dogecoin (DOGE) from the spot yesterday.

NEO (NEO) down by a similar amount, losing 1.54 percent on the day to press time.

Total market capitalization of all cryptocurrencies remains below $210 million, currently at $208.4 billion as of press time – down from an intra-week spike to around $221.6 billion Oct. 15, but remaining higher than at the start of its weekly chart at around $203 billion.

Yet more stablecoin news continues to break as the week ends, with third largest cryptocurrency exchange Huobi announcing the creation of what it calls its own native “stablecoin solution,” HUSD, which has been designed to help manage the four other USD-backed stablecoins currently listed on the exchange – (Paxos Standard (PAX), True USD (TUSD), USD Coin (USDC) and Gemini Dollars (GUSD).

Meanwhile, as meagre market momentum holds, crypto and blockchain-related merger and acquisition (M&A) activity is reported to have surged by over 200 percent in 2018, with analysts suggesting that the so-called “crypto winter” is being viewed as an opportune moment for institutions to make “strategic” deals in the space.