Since the time that one can gather reliable data, beginning in July of 2010, Bitcoin has had only one year where it ended in negative territory: 2014. This is the year when Mt. Gox suspended trading after a hack. The event looked, for a time, to have signaled the end to the young experiment in decentralized currencies.

For so-called “hodlers”, it was a rough year. Bitcoin ended down some 63%, dipping more than 90% by late February from its December high. It thus started the year in decline, and despite a few bounces up, continued the general decline. Volatility was terrible, with day-over-day declines of up to 43% (!), and volume plummeted for almost the whole year — except when major declines occurred. The following image captures the year and its heartache. 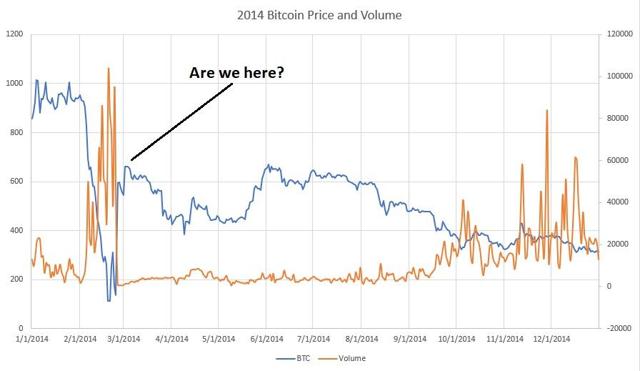 In some ways, 2018 looks to be shaping up similarly. Our current Bitcoin bubble burst in December of 2017, has continued its decline into 2018, had lost some 70% of its value since its high, and looks to be slowly and inexorably drifting lower, with a few bumps up to sustain hope. Take a more careful look at the following two graphs for the first three months for 2014 and 2018, respectively. 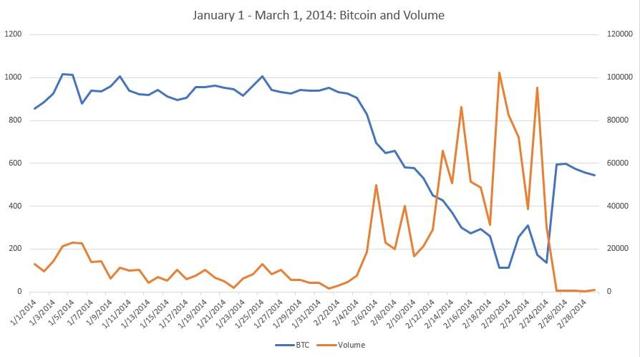 And now for a closer consideration the 2018 year. 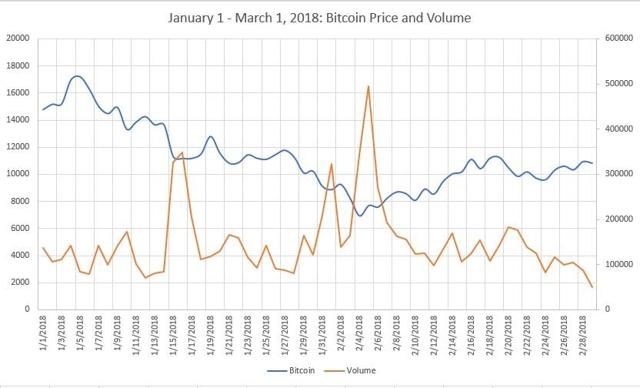 Visually, the critical difference looks to be a matter of severity: 2014 was more precipitous in its decline than 2018. But quite worryingly, the massive decline in daily volume seems to be parallel in both cases, with spikes only occurring with major sell-offs. Even more strikingly, the reasons for the decline are similar. The Mt. Gox hack was not only, or even primarily, a scandal. It was the largest exchange in the world and so facilitated the basic way in which Bitcoin could be used. Mt. Gox matters because it was a crucial (infra-)structural part of the Bitcoin network. In a similar way, the central reasons for the 2017 bubble crash were largely structural: several of the world’s major governments, including China, India and South Korea, took active steps to limit access to Bitcoin. Since these are each large portions of the global demand and use of Bitcoin, it is unsurprising that restrictions in these cases adversely affected Bitcoin demand, volume and price.

My sense is that Bitcoin will likely make back its losses and close the year out about 30% above its January 1st price. So that sets up a price target at about $19,000. The reason is that I think this year will more closely resemble 2015 than 2014, since in 2015, the existential threat to Bitcoin was belatedly recognized as passed. I think a similar re-adjustment in perception about Bitcoin’s global participation looks to have occurred in 2018. Moreover, Bitcoin enjoys three important advantages over 2014:

Collectively, one might call these “structural differences.” Let’s look at them a bit more closely.

The most obvious of these differences is the higher visibility or awareness that Bitcoin presently enjoys. We all have anecdotal evidence of this difference — the sort where family members (my mother heard about Bitcoin in Fox News), or colleagues (a friend of mine in the political science department has begun trading cryptocurrencies) have now heard of the coin and expressed an interest in it. In terms of the familiar adoption curve, I think that we are squarely in the early adopter’s phase and perhaps moving into the early majority phase.

Differences in perception about the value and risk of Bitcoin, such as those expressed by more mainstream commentators like El-Erian, I think, generally resolve into a disagreement about our place on this adoption curve. If he and others like him, including Jamie Dimon and Warren Buffett, are right, then Bitcoin is still quite risky because it really could go “poof.” If I’m right, then Bitcoin enjoys much broader institutional support, and one only needs to wait for the rise in value that is likely to accompany adoption by the early majority (where the real money is). So, let’s move to the second of the structural differences from 2014: institutionalization.

There are a few features of institutionalization that are obvious: the number of exchanges globally has increased tremendously, the Robinhood app (popular among millennials) is planning to make Bitcoin trading available at no cost, and Wall Street has taken a serious interest in Bitcoin. With respect to this last point, I mean not only that there are now full-time persons who specialize in how to move Bitcoin into IRAs, but especially that the existence of futures makes Bitcoin hedge-able for institutional investors for the first time. Legal clarification by the SEC and IRS are still needed, but this will only help large financial flows enter the Bitcoin world.

A more obscure, but…