Bitcoin has climbed 10% this week, gaining along with gold as stock markets remain under significant pressure—with Bitcoin‘s performance outpacing the Dow, the S&P 500 and the Nasdaq.

The Bitcoin price, which is more-or-less flat for the year, has rebounded from lows of under $4,000 in mid-March (though just one major cryptocurrency is outperforming Bitcoin).

The precise reason for Bitcoin‘s rise was not immediately clear, though reports of an increase in Bitcoin demand this week could herald a retail investor driven surge similar to Bitcoin‘s epic 2017 rally.

The Bitcoin price has climbed this week, adding some 10%, as traders and investors continue to steer … [+] away from equity amid the coronavirus crisis.

“I haven’t seen this much organic new interest in Bitcoin since early 2017 in my non-crypto circles,” said well-known crypto investor Ari Paul, the co-founder and chief investment officer of BlockTower Capital, via Twitter.

Bitcoin’s 2017 rally, which saw the Bitcoin price soar from under $1,000 per Bitcoin at the beginning of the year to around $20,000 by December, was largely driven by retail investors and so-called fear of missing out as early adoptors became overnight millionaires.

“Got pinged by three separate old friends I haven’t spoken to in years about buying their first Bitcoin yesterday,” Ari added.

Meanwhile, some of the biggest Bitcoin and cryptocurrency exchanges around the world have reported an uptick in both new users and trading volume.

U.S.-based Kraken reported an 83% increase in users with peer-to-peer Bitcoin marketplace Paxful boasting it had doubled its signup rate. 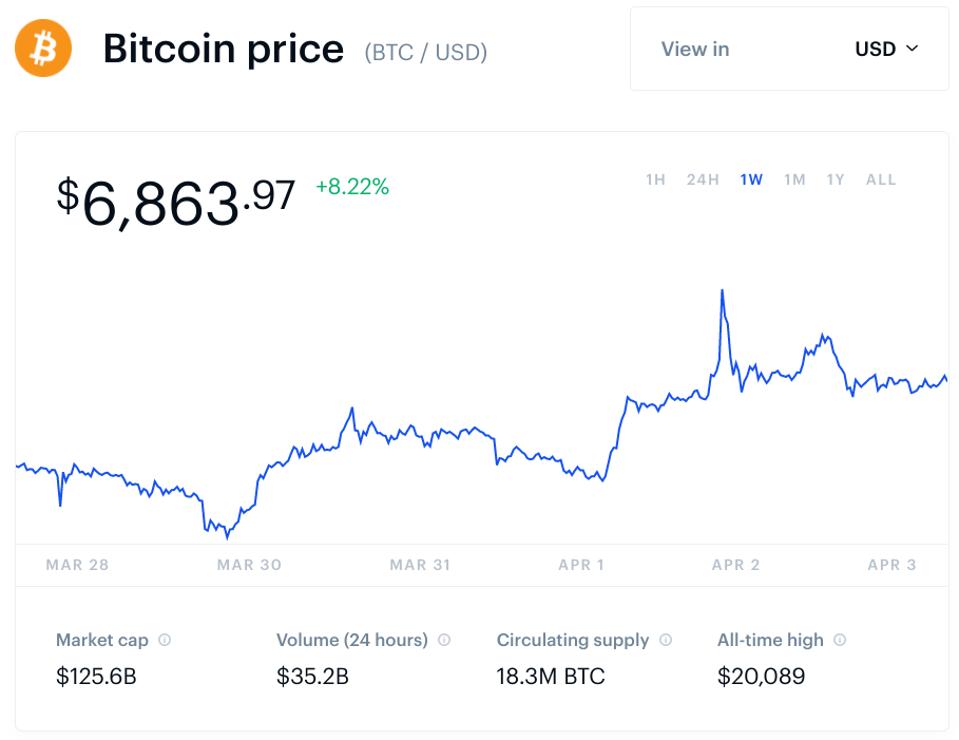 The Bitcoin price suddenly surged this week after trading sideways since it took a massive step down … [+] last month.

“With Western governments struggling to contain COVID-19 and forcing cities and nations into blanket quarantines, individuals feel an urgent need to get out of the centralized financial system,” Pierre Rochard, Kraken’s Bitcoin strategist, told Decrypt. “They can’t go protest in the streets, so they protest with Bitcoin.”