Get Forbes’ top crypto and blockchain stories delivered to your inbox every week for the latest news on Bitcoin, other major cryptocurrencies and enterprise blockchain adoption.

THE BEST USE FOR BITCOIN

The defining moment of 2019 markets so far has been the cross-asset rally that took place over the first nine months of the year. It included stocks, Treasuries, gold, and of course, Bitcoin, up 275% at one point.

Then Bitcoin saw a major crash over the summer, even as stocks and other risk-on assets continued their run. Why? Because the best way to consider Bitcoin is as a highly speculative gamble on its future use as a store of value.

Bitcoin prices rose sharply on Monday, climbing upwards of 4% in a matter of minutes. The digital currency started appreciating around 11:15 a.m. EST, increasing from $8,787.11 to an intra-day high of $9,123.34 less than 10 minutes later.

Bitcoin wasn’t able to hold onto its gains this week: by Friday morning, it had fallen back to levels around $8,400. 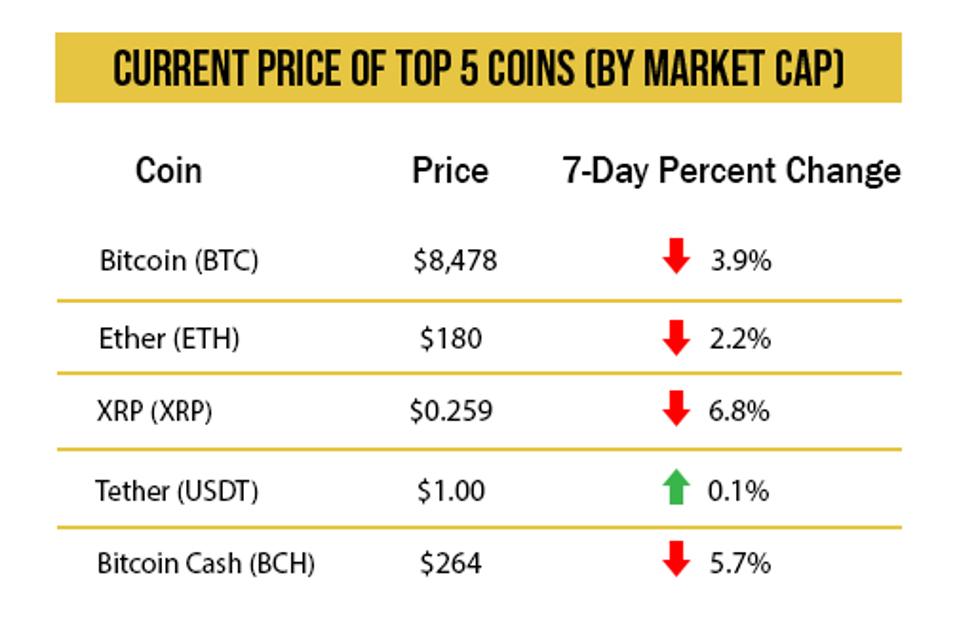 THE CASE FOR LIBRA

Facebook and Zuckerberg are taking hits for Libra, their proposed cryptocurrency and payment system, and regulatory pressures have forced a number of companies that were partnering with Facebook on this project to drop out. If regulators don’t kill it, however, Libra has the potential to benefit billions of people. But in the face of so much hostility, will the project get off the ground?

ALTCOIN SURVIVAL OF THE FITTEST

Over the last decade, thousands of digital currencies have come into existence. While this rapid proliferation has helped illustrate the enthusiasm of cryptocurrency advocates, many are wondering how many of these projects will survive in the long term.

“Between crypto coins, corporate coins and state coins, we’re probably not going to end up with 100+ widely used digital currencies,” said Jacob Eliosoff, a cryptocurrency fund manager. “Network effects will matter and there will probably be only a few winners.”

Former European Central Bank (ECB) president Jean-Claude Trichet has slammed Bitcoin and Facebook’s Libra project, warning Bitcoin is “not real” and not the future of money.

“I am strongly against Bitcoin, and I think we are a little complacent,” he said, speaking during a panel discussion at Beijing-based media group Caixin’s annual conference last weekend. Trichet’s remarks come amid excitement in the Bitcoin and cryptocurrency industry that China could be about to relax its strict crypto restrictions following a ban on Bitcoin exchanges in 2017.

What happens when a blockchain project doesn’t get off the ground like its founders thought it would? Read about one entrepreneur’s story here.

Blockchain could tell you everything about your groceries. Here’s what it may cost [CNBC]