As of this writing, there are 15 cryptocurrencies with market caps of over $1 billion. The largest, of course, is Bitcoin, where the market cap is $112 billion. As a reference point, Bitcoin had a market cap of over $300 billion at the start of the year.

As I have mentioned previously in this column, the term “market cap” is a rather nebulous concept when it comes to a cryptocurrency. When describing operating companies, market cap is the price of the stock times the number of shares. It is a way for the market to discount future cash flows for as far as the eye can see. Companies with consistently rising profitability have more expensive share prices than those with declining or stagnant profitability.

When it comes to Bitcoin or any other cryptocurrency, the term market cap is the number of Bitcoins in existence times the price of Bitcoin, but with Bitcoins there are no future cash flows to discount. The way you know an investment is a bubble is that you know it can never produce the cash flows to justify its current price, which is a description that fits Bitcoin to a T.

I know that, in theory, blockchain technology can be revolutionary as a way to facilitate transactions, but blockchain can be made to work without Bitcoin. In fact, most people speculating in Bitcoin today did not buy the cryptocurrency to use in a transaction but to profit from a continuation of its past meteoric rise.

Which phase is the Bitcoin mania in now?

On December 19, 2017, one day after Bitcoin hit its all-time high, I wrote that “Bitcoin is perfectly tracking major bubble phases” and showed the following chart of major bubble phases. If I had to guess what bubble stage Bitcoin is in, I would guess anywhere between fear and capitulation. I do not believe that Bitcoin has actually reached capitulation yet, as it is still hovering near major support of $6,000, down from $19,000 at the time of the referenced article. 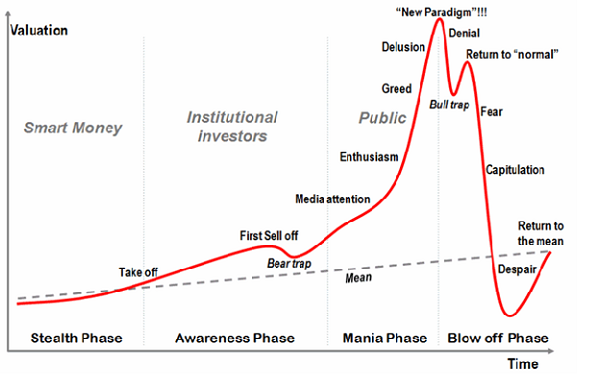 While Bitcoin is holding up despite being close to capitulation, other cryptos are capitulating. While there are 15 crypos with “market caps” of over $1 billion, they have lost significantly more than Bitcoin so far in 2018, so it will be interesting to see if there will be fewer than 15 by year end. My bet is there will be. 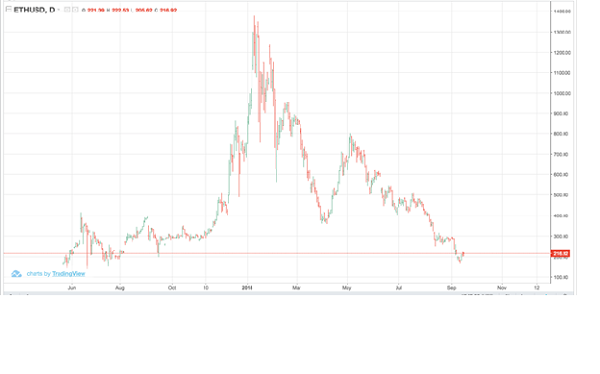 A case in point is Ethereum, going by the symbol ETHUSD (Market Cap: $22.1 billion), which keeps cascading lower like a busted dot.com IPO late in the year 2000, or even Ripple (market cap $11.1 billion), going by symbol XRPUSD, which actually looks worse than Ethereum, if that were possible.

Very similar to the Nasdaq in 2000, some cryptos are flaming out faster than others. In fact, back in 2000, some of the crappier dot.coms began to decline before the technology index made its bubble high in March of that year. Similarly to the Nasdaq in 2000, many of those cryptos will disappear just as the cash-burning dot.coms could no longer raise money and had no viable business models to keep them operating.

Update on the Gold/Bitcoin Ratio

As I opined back in December 2017, the alternative to paper money is not Bitcoin but gold, so if the choice were given to me to hold Bitcoin or gold bullion for 10 years without being allowed to sell the investment until the decade ran out, I would take gold bullion without a doubt.

While gold is down in 2018, as I expected at the time, Bitcoin is down a lot more, making this a successful relative choice. And if the dollar keeps rallying as the Federal Reserve keeps hiking rates and unwinding its balance sheet, gold may very well be down some more by the end of 2018 and in 2019.

I think that the Broad Trade-Weighted Dollar Index will make an all-time high in this cycle with continued Fed tightening, particularly if President Trump’s controversial trade negotiations continue to bear fruit. That reaffirms my bearish stance on precious metals, but it does not change my belief that if one has to hold gold bullion or Bitcoin for a decade, one will be a lot better off with gold bullion. This is because the gold bar will still be here in 10 years, whereas with that overvalued line of code called Bitcoin, there may be nothing real to sell.

Disclosure: *Navellier may hold securities in one or more investment strategies offered to its clients.

Disclaimer: Please click here for important disclosures located in the “About” section of the Navellier & Associates…