How is the Bitcoin sell-off affecting equity markets? Not much, it would seem.

Even as Bitcoin’s price plumbs new depths not seen since February, equity markets are on a bull run. The S&P 500 has provided returns of almost 4% to investors since the beginning of this year. Bitcoin, on the other hand, has lost approximately 51.5% of its value during the same period. A closer look, however, reveals correlations in price movements.

A Case of Decreasing Correlation

While they are different asset classes, price movements for the broader equity markets and Bitcoin began tracking each other after the cryptocurrency exploded in popularity last year. Similarly, both Bitcoin and cryptocurrencies reached lows during February and March amid a sell-off. The ostensible reason for this is investor risk appetite, which is transferred between asset classes to avoid losses. 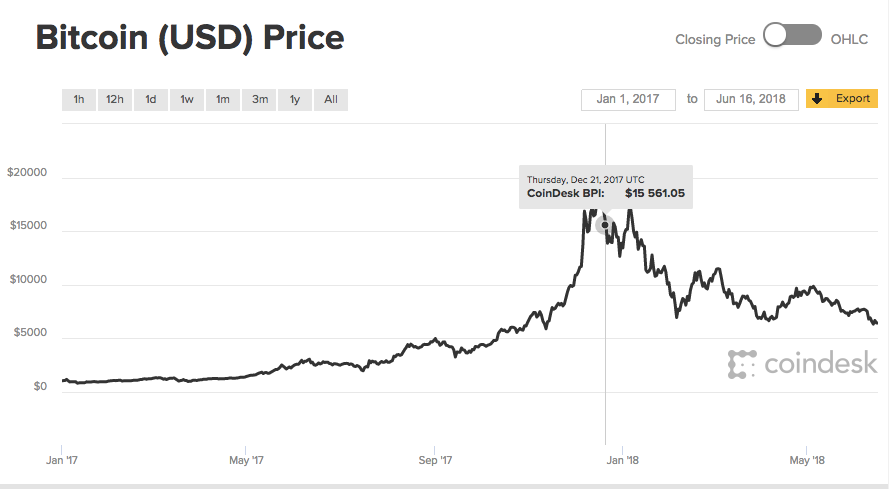 According to analysts at Morgan Stanley, the correlation between both asset classes last December was 0.4. (A correlation of 1 implies synchronicity in price movement). Another research firm, Datatrek, drew similar conclusions. “Since investors have only one brain to process risk, they will make similar decisions about cryptocurrencies and stocks when they see price volatility in the latter,” analysts at the firm wrote. They stated that the correlation was strongest during periods of downturn in equity markets and was more disconnected when equity markets were charging upward. (See also: Are Bitcoin Price and Equity Markets Correlated?)

Since May, however, the correlation weakened and, subsequently, disappeared completely. “Bitcoin attracted a huge amount of speculative capital early and that capital is getting bled out,” said Boris Schlossberg, managing director of FX Strategy at BK Asset Management, to CNBC. He predicts further divergence in the prices of Bitcoin and stocks. A Bitcoin price point below $5,000 will separate Bitcoin’s HODLers (or those who believe in the cryptocurrency’s philosophical underpinnings) from investors and traders (or those who are out to make a quick buck), he says.

Whether that divergence eventually morphs into a convergence is still to be determined, given the nascent nature of cryptocurrency markets. London-based research consultancy Capital Economics is not betting on it. In a recent note, the firm called Bitcoin “worthless” and stated that its correlation with equity markets is coincidental. (See also: Bitcoin Is ‘Worthless’: London’s Capital Economics.)

Investing in cryptocurrencies and other Initial Coin Offerings (“ICOs”) is highly risky and speculative, and this article is not a recommendation by Investopedia or the writer to invest in cryptocurrencies or other ICOs. Since each individual’s situation is unique, a qualified professional should always be consulted before making any financial decisions. Investopedia makes no representations or warranties as to the accuracy or timeliness of the information contained herein. As of the date this article was written, the author owns 0.21 Bitcoin and 1 litecoin.