If this is your first time reading a Bitcoin (BTC-USD)(COIN)(OTCQX:GBTC) Value Indicator report, you may want to refer to the original article, where I explain the three strongest corollaries with Bitcoin’s market cap. You also may want to read the first Bitcoin Value Indicator report, published in July of this year, where I explain further how I turned those metrics into a consolidated system.

If that’s too much work for you, I can sum up. With Bitcoin you need to think log scale. When you do that, strange things happen, like you start to understand what’s going on. All of the sudden the price of Bitcoin becomes less of a mystery, and something you might build a career by writing about. Thank you, I’ll be here all week.

Recall that unique addresses are a proxy for the number of users, because they indicate how many non-zero Bitcoin addresses are in use. This metric has its strengths and weaknesses, which I wrote about here. Also, I have reviewed several other pricing methods which attempt to do the same thing using Metcalfe’s Law. You can find those here and here.

What does the data say?

Well, the more people use Bitcoin, the more it’s worth. Essentially the value is in the network, much like with Facebook (FB) or Twitter (TWTR). Let’s have a quick recap of where we’ve come from and where we are now.

That low point in unique addresses is a point where Bitcoin was hovering around $6,900 USD back around April 11, 2018. Using the seven-day average of the number of unique addresses (which smoothes out low points caused by low volume on the weekends), you can see that growth has returned since April to this underlying fundamental. The price today is lower, but the number of users appears to be growing again, and this time the network can support more transactions than before due to the rise of Segwit Adoption. If I had to guess I would say Bitcoin could now handle 50% to 100% more transactions per second than when we had the last peak in December/January.

The hash rate of the Bitcoin network represents the amount of computing power securing the PoW process which mints new Bitcoins. Today, you have to be at scale to compete as a miner. So, this figure represents a culmination of the capex invested in mining operations multiplied by the speed of the individual machines.

By the way, next time someone tells you Bitcoin mining is a waste of energy and “inefficient,” show them this chart. 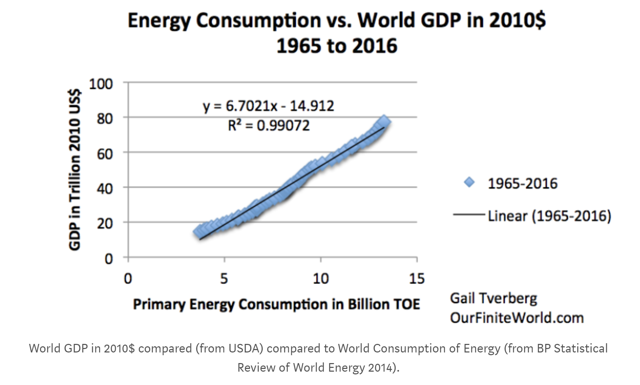 It turns out human development requires power, and you can predict GDP if you know a country’s energy consumption. Besides that, Bitcoin miners are a purchaser of last resort since they need cheap power, but I digress.

The relationship is undeniable. The data in the set goes from 2010 to 2018. So, what price does the hash rate of the Bitcoin network predict right now? We’ll get to that in the summary section.

Bitcoin’s total transactions – why they matter

This is one of my favorite quotes from Hal Finney, an early Bitcoin pioneer who has since passed on.

Every day that goes by and Bitcoin hasn’t collapsed due to legal or technical problems, that brings new information to the market. It increases the chance of Bitcoin’s eventual success and justifies a higher price.- Hal Finney, June 4th, 2011 – Bitcoin Talk Forum

The longer Bitcoin lives, it is pushed toward its destiny of either global disruption or total failure. I wrote about this here, in case you want to know more. Basically the more transactions get completed on chain, the older Bitcoin is (total transactions is a proxy for time), and we can use this growth rate to understand the current valuation levels, wow!

What does the data tell us?

I’m so glad you asked, let’s have a look. 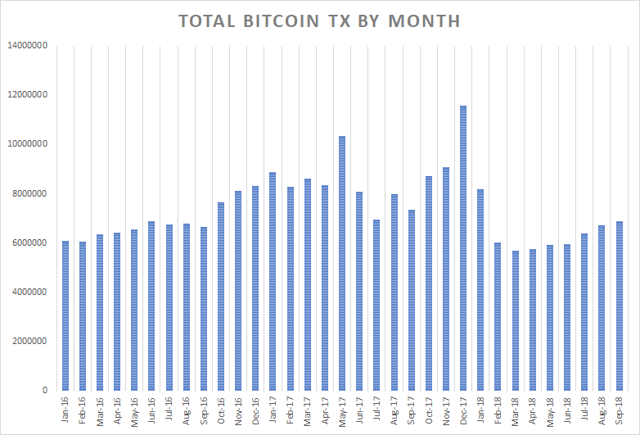 As you can see, the total number of monthly transactions was up for the sixth month in a row. This is a very bullish sign, showing that the price is coming back into alignment with the natural growth rate of the Bitcoin network.