In February, I wrote an article to warn people against mindlessly buying the dip on Bitcoin (BTC-USD) and other cryptocurrency. The past has shown that bear markets in cryptocurrency – just like bear markets in other assets – can last multiple years. In this article, I will try to analyze if this drop of the Bitcoin price is merely a return to the mean or the start of further degradation of its value.

How bad is the damage?

When looking at a multi-year chart of the Bitcoin price, it looks terrible. There seems to be a lot of potential for it to drop even further.

Readers of my previous article know that I love to look at logarithmic charts to analyze the price behavior of assets which have grown much in a very short time. In my opinion this is a fairer way to look at the price development of these assets, because it enables us to compare percentage changes in the price over time in a better way. Let’s take a peek at the logarithmic chart since the middle of 2013.

On this chart it can be seen that the recent price drop might have been large, but that the long-term trend has not been reversed yet. The direction is still up. This does mean that there seems to be a lot more potential for the price of Bitcoin to drop more.

Scenario 1: Return to the Mean

Now, I do not want to do an extensive technical analysis of the Bitcoin price, but if we extrapolate the trend which started at the beginning of 2015, which implies a rising price over time, we would end up at an expected price of around $3,000 today. This increase is exponential since the chart we are using for this analysis is logarithmic.

My interpretation of the trendline since the beginning of 2015

Because of the extraordinary price development during the previous year, this price was far surpassed – but could it be that the price will eventually return to this mean? Of course, Bitcoin is not a normal asset, its value seems to respond to market conditions and price developments in an extreme way compared with other assets such as stocks or currency exchange rates.

The big question is how useful such a trendline is for the Bitcoin price. In my opinion, the usefulness is that it is a sanity check in case of overshoot. In hindsight, it seems clear that Bitcoin prices of more than $10,000 were extreme when looking at the graph. But Bitcoin prices are more driven by sentiment and technological promise than by its fundamentals, and as such it is a bit questionable whether looking at a graph is useful in our discussion.

Many authors (including me) have been arguing that Bitcoin is one of the least technologically advanced cryptocurrency. In a way, this is not surprising since Bitcoin was the first cryptocurrency. Newer cryptos are using better technology and are using innovations which make them better, safer, quicker or leaner than Bitcoin.

This article describes this scenario very well: because of the technological limitations of Bitcoin, it is quickly getting replaced by better ones. According to the analysis described in the source, the design of Bitcoin simply prevents it from having a long-term future.

I partially agree with this, but we should not forget that there is possibility for change, both in the form of forks and in the form of behavior of people. For instance, Bitcoin was never designed to be a technology used for quick and easy payment. The lightning network partially solves this problem.

Return to the mean: the gold standard

Some people claim that there is a significant possibility that Bitcoin could become the gold standard of cryptocurrency. It could be argued that it has already behaved in such a way during the last couple of years.

But, as other authors have emphasized as well, when we look at the total market capitalization of all cryptocurrencies, we can see that since 2017, the dominance of Bitcoin has evaporated: 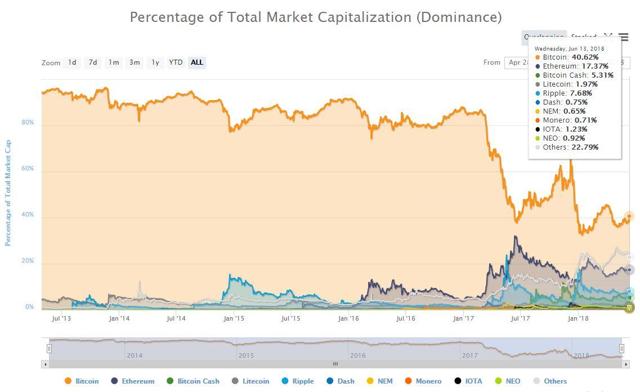 This seems to be a supporting argument for the “descent into oblivion” scenario. We should not be too quick in drawing conclusions though. The graph of percentage market capitalization might be influenced heavily by the development of new cryptocurrencies. If Bitcoin truly became the gold standard of cryptocurrency, it is not unthinkable that it would stabilize with a market percentage which is lower than in the past. This does imply that its market capitalization percentage needs to stabilize eventually and not evaporate any further. Also, Bitcoin urgently needs to solve its problems: for instance its gigantic electricity use, which could be mitigated by for instance using energy which would otherwise be wasted. If its problems are not solved, other cryptocurrencies seem more viable for a market position as gold standard than Bitcoin.

Analyzing the implications of both…