I have presented my case for the point of view that Bitcoin (BTC-USD)(COIN)(OTCQX:GBTC) is a log scale phenomenon many times. However, if this happens to be your first time reading one of my articles, or any article on Bitcoin for that matter, consider the charts below.

Here’s the hash power of the Bitcoin network in linear scale. Not very meaningful, is it? But when we flip the Y-axis to log scale…

That’s better, isn’t it? Look at all the information that we just couldn’t see before, like what happened in 2011 and 2014. For the sake of my regular readers, we’ll move on from this topic which I feel like I may have beat to death.

However, further examination has shown that there may still be some life left in this log-scale horse. So, today we’re going to talk about an interesting stat that we can pull from the Bitcoin network, total transactions.

What are total transactions?

When you hear me talk about total transactions, I’m referring to the running total of all Bitcoin transactions that have ever been transmitted and confirmed on the Bitcoin blockchain. This number cannot go down, because it’s a running count. If there are 10 transactions sent per day, then the number grows by tens. If there are thousands, then it grows by thousands. But, if the number stops growing, then Bitcoin is actually dead.

Now then, since the total transaction count can tell us if Bitcoin is still alive, and we know that it grows faster as the frequency of transactions increases (and slower if they decrease, of course), I have suggested that there are two novel uses for this piece of data.

It can be used as a proxy for time. The more transactions are broadcast, the “older” Bitcoin is. It acts like a sort of trend line, from which we can gauge the disparity between the current epoch and the price.

An inquisitive follower on Twitter (TWTR) noted that since Bitcoin’s price has tended to increase over time, you could find a positive correlation with anything else that increases over time:

This is true and a valid concern. However, I believe we can do better than simply snapping a trend line on a data set over time. Let me show you what I mean.

You’ve probably seen this chart before. But, there’s another thing you may not have noticed. This chart has a Y-axis in log scale, and yet the X-axis is in constant time, which is linear scale. Do you see how the chart seems to curve off to the right? The data is actually following a log curve in log scale. What does this mean? See the chart below for a helpful illustration of this curve. 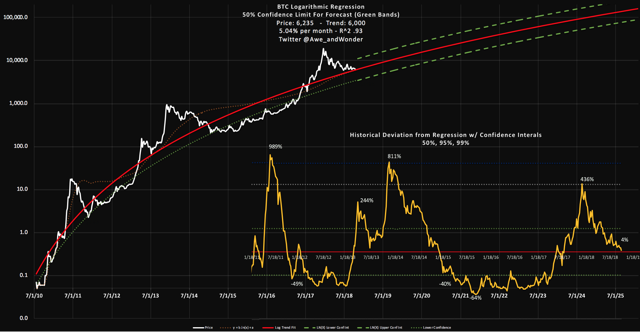 Source: Awe and Wonder via Medium

Is there in fact a way to look at the X-axis in log scale? And if there was a way, is it useful or any better?

I have good news, there is a way and I think it’s very useful for a number of reasons. Do you remember how I said the total transactions could be a proxy for time? Let’s put those on the X-axis and the price on the Y-axis, just for kicks.

The total transactions here are set to display in log scale, and notice that the chart is now more of a straight line, rather than a logarithmic curve? Now, scroll back up to the price chart that I posted above (the one with the white background) with time as the X-axis. Do you notice something else that’s peculiar? I’ll give you a hint, the chart gets compressed as you move forward in time.

Bitcoin is not just getting bigger, it’s getting faster as it grows too. Measuring this in linear scale time forces you to do one of two things, draw a curve like Awe & Wonder has done, or compress time as well if you want to run a linear regression model. I have chosen the latter here, and to check that this relationship is actually stronger, I did a little test.

This may not seem like a huge difference, but if my theory is correct, the log/log relationship will strengthen over time while the log/linear time relationship grows steadily weaker. (You can’t very well fit a linear trend line to curved data.)

So, time is speeding up?

Exactly! But this shouldn’t really surprise you, since every year we produce more data than the year before, and computers have been increasing in price/performance exponentially for more than 100 years. It’s almost like we’re being sucked into a technological singularity…

One of the things that I hear the most is, “your models don’t prove causation.” Thanks for that. In fact, I can guarantee that someone reading this will post exactly that in the comment section. Yes, for the millionth time, correlation does not imply causation. However, I contend that there is much more subtlety…