Bitcoin SV [BSV], the Bitcoin Cash [BCH] hardfork, was pushed out of the top-10 list last week, courtesy of Binance Coin’s [BNB] remarkable rise. While the coin’s chief advocate, Craig Wright proclaims to be the real Satoshi Nakamoto, BSV has been slipping on the coin charts, despite the bullish market conditions.

At press time, the coin has managed to edge up against the US dollar by a mere 1.29 percent and is now priced at $65.69, with the market cap of the coin pegged at $1.15 billion.

In terms of exchange dominance, the coin’s highest trade volume is taken by the exchange IDCM, which holds $5.59 million or 9.43 percent of BSV’s trading volume in the trading pair BCHSV/USDT. Following closely behind are Bit-Z and DragonEX, with 8.13 percent and 7.74 percent held in the trading pairs, BCHSV/BTC, and BSV/USDT. 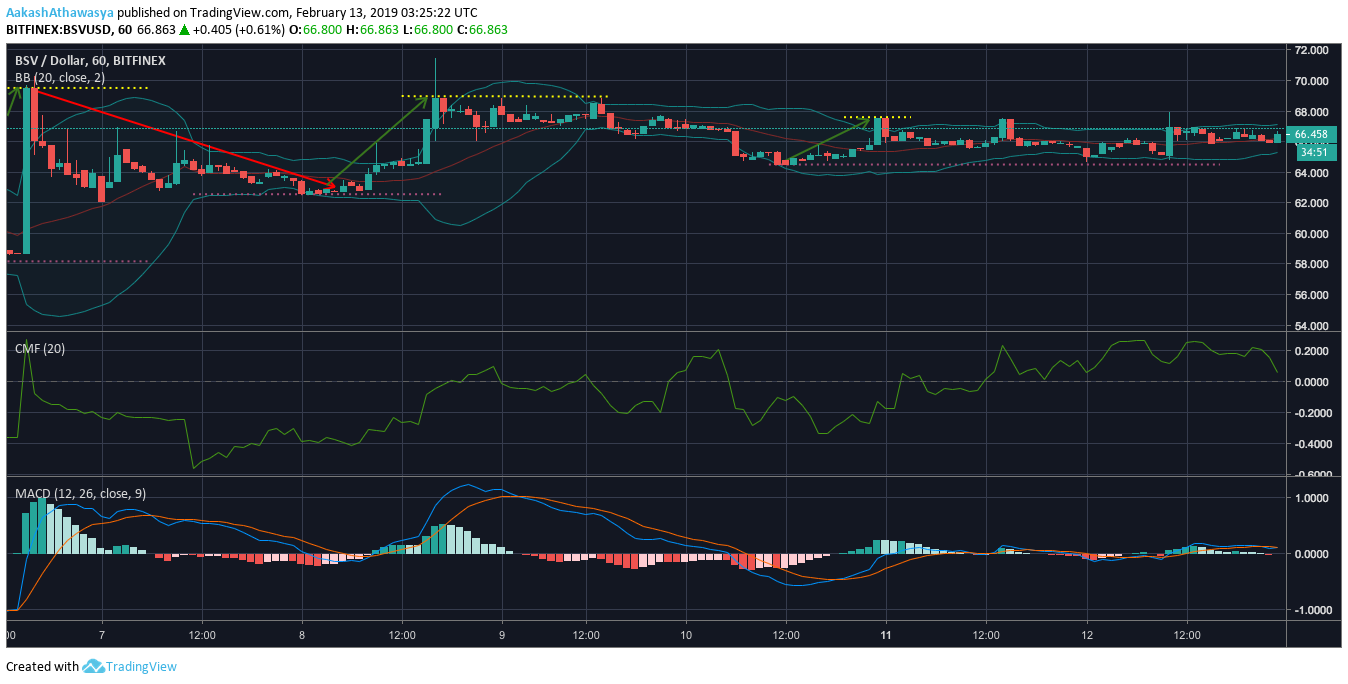 The Bollinger Bands points to decreased volatility as the price of the coin is relatively stable, while the Moving Average line points to a bullish trend.

The Chaikin Money Flow tool shows that the money put into BSV coins has been increasing since 11 February, but the recent trend shows a mild decline, with the CMF line heading for 0.

The MACD line shows that the coin has been in a bullish zone since the start of this week.

The one-day chart shows that the coin has been on a downward slope since mid-December, but the recent signs point to an upward swing. The coin’s downtrend stretched from $114.87 to $68.43, with the current price below the same.

Bitcoin SV finds immediate support at $61.14, which the coin dipped below last week. The immediate resistance level of the coin stands at $68.89, with the current price of the coin nuzzled below.

The Parabolic SAR points to a bullish trend for the coin as the dotted lines are aligned below the coin’s trend line.

The Fisher Transform line show that the coin is in a bullish zone as the Fisher line has overtaken the Trigger line.

The Awesome Oscillator shows that the coin is trading below 0. However, the closing bars are marked green, pointing to upcoming bullish activity for the coin.

Bitcoin SV has been increasingly trying to push its prices up, following a bearish market for the coin that has persisted since the close of the previous year. The coin has been pegged behind Binance Coin, with a market cap difference of over $150 million, but the short-term indicators show a bullish rally for the coin. In the long-term, however, the coin has been going through a stable patch with the recent signs indicating an upswing for the coin. If the market does turn in the favor of Bitcoin SV, as surrounding coins see a market correction, BSV could well move back into the top-10.