Bitcoin is currently trading above the strong 50 days moving average. For how long can the bull hold this position? That’s the question.

The tight range between $3500 and $3600 has now been surpassed by $100; trading above the squeeze at current $3700 price level in a steady incline. Though, the Bitcoin price is still playing around the bear zone which holds till $4500 resistance. There, a clear bull-run can be confirmed.

For the past three days, Bitcoin has been closing on highs. In fact, the 50 days moving average line (marked yellow) was crossed up today. Despite the choppy signal, the gradual high seems to target next key resistance level at $4000. Today’s closing would determine the bull’s positions.

Observing the daily MACD, the trend is attempting the positive zone. As the strength builds up, the direction remains unclear; but the future will tell. On the Stochastic RSI, the buying pressure is nearly exhausted but the momentum is building stronger. The closest bear level is $3350 support.

As it appears, the possibility of the Bart Simpson pattern seems uncertained as trading is now above the last week bull flag. For the bull side, the next key resistance levels are $3800, $4000 and $4200. Currently, the 4 hours Stochastic RSI revealed a potential bearish move. This is likely to send Bitcoin price to $3550 support area and beyond. 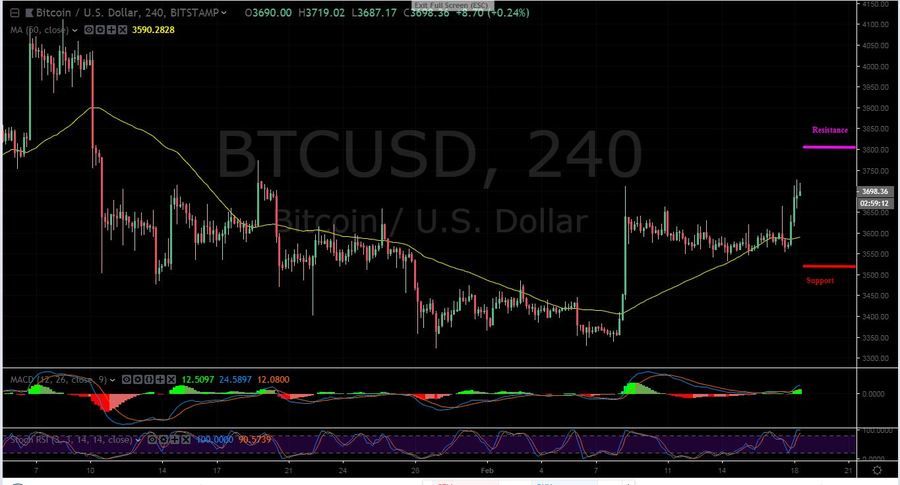 Following the 50 days moving average line (in yellow), the price action keeps respecting the yellow line since the last ten days break-up. At the $3800 resistance, another bull flag might be experienced; resulting to a possible consolidation before continuing the higher high, higher low pattern.

At the moment, the MACD signaled a bullish move which was shown on the past four hours candle chart. Like said earlier, the Medium-term incline is likely to end at $4200, lies the strong resistance level.

“I’m waiting for this next high, according to Elliot Wave I think we’re in a ‘Greater B Wave’ and then we’re going to see a lower low and I’m aiming for about 2700 to 2800’ish as my low, so that’s going to be another epic short.”

$BTC THE BEARISH SCENARIO (Bitmex Chart)
Rejection here at $3860 or lower,
Down to lower regions, 2500 low.
Bounce for X wave.
Short term expecting one last small wave up before some sort of retrace. This will help us see where it will go next pic.twitter.com/BJngkWCbN4

Please note: Cryptovibes.com is not a financial advisor. Do your own research before investing in any financial asset. We are not responsible for your investing results.