The number 1 ranked cryptocurrency currently holds a total market cap value of $109 billion after seeing a turbulent 90 day period where price action drops by 13%. The 66-month-old cryptocurrency is now trading at a value that is 67% lower than its all-time high price.

Let us analyze price action for BTC/USD over the short term and continue to highlight any potential support and resistance moving forward. 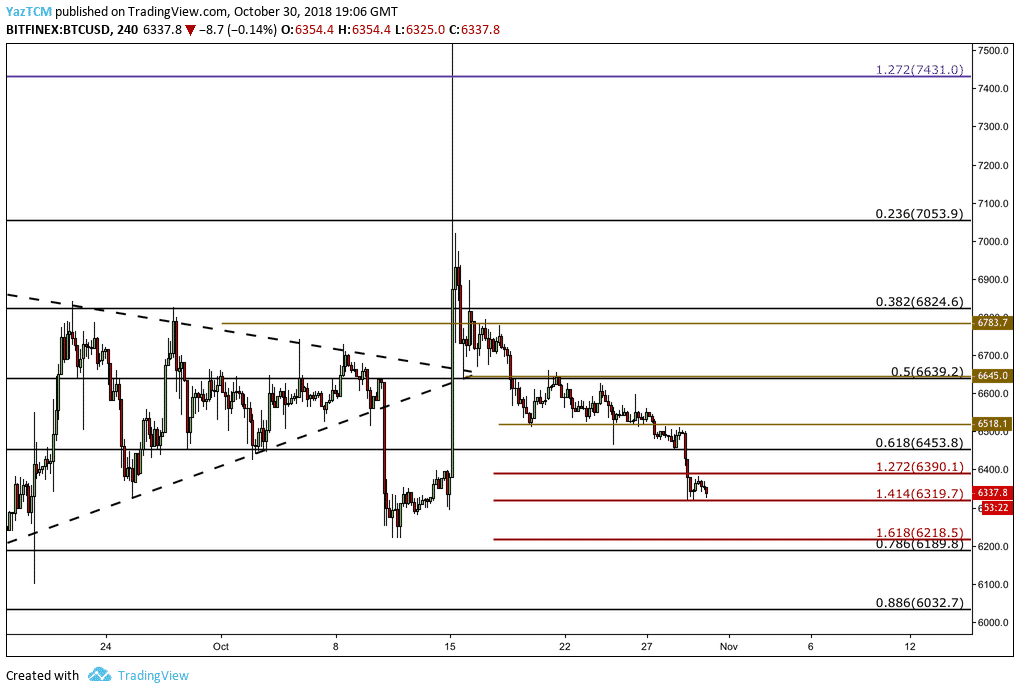 Analyzing the market from the short term perspective above, we can see that price action has slipped below our identified support at the .618 Fibonacci Retracement level priced at $6543.

Price action is now trapped between a very narrow range between the 1.272 and 1.414 Fibonacci Extension levels priced at $6390 and $6319 respectively.

If the bears continue to push the market even further lower then more support below is expected at the short term .786 and .886 Fibonacci Retracement levels (drawn in black) priced at $6189 and $6032 respectively.

Alternatively, if the bulls can regather momentum to push the market action above the upper boundary of the narrow range they will meet immediate higher resistance at the .618 Fibonacci Retracement level priced at $6453. Further resistance above this can then be expected at the .5 and .382 Fibonacci Retracement levels priced at $6639 and $6924 respectively.

If the bulls can continue to climb above the .236 Fibonacci Retracement level (drawn in black) priced at the $7053 handle, then further higher resistance can be located at the 1.272 Fibonacci Extension level priced at $7431.

The RSI (not charted) is printing an extremely favorable reading toward the bears, on the 4HR chart,  as the market trades in oversold conditions. If we would like to see a recovery, we would need to see the RSI head back toward the 50 handles and eventually break up above it.

Bitcoin Price Analysis: Bitcoin Penetrates Below $6400; Are the Bears Heading Back Toward $6000?