By Parke Shall with Thom Lachenmann

Bitcoin is on a tear, through highs and above $3000 this weekend.

(Chart courtesy of Zerohedge, which has a great explanatory article on Bitcoin’s performance since the Bitcoin cash fork, which you should read here)

Bitcoin has been so popular that investors continue to pay nearly double the spot price right now. In this article, we wanted to examine where this practice is taking place and the motivation behind bitcoin products trading at such a substantial premium. What are the pros and what are the cons of paying up to own bitcoin?

Of course, those that are not new to the bitcoin scene probably already know that we are talking about one of the only exchange traded bitcoin products on the market today, the Grayscale Bitcoin Trust (OTCQX:GBTC). The trust, listed under the ticker GBTC, is set up so that owners of one share have a claim to 0.09258535 bitcoin, according to the GBTC information page. The trust currently has about $475.8 million under management and to this day remains one of the only ways to get exposure to bitcoin in a traditional brokerage account.

The product also trades at a sizable premium, as you can see by taking the $475 stock price below and multiplying it by 10.86, which gives you an implied bitcoin value of about $5163 right now. This is a premium that is approaching 75% and is consistent with the type of premium that this product has priced in since its inception. The question then becomes, why do people pay this premium and is it worth having exposure to this product yourself?

The first reason that people pay this premium is simply to get exposure to bitcoin. GBTC owners are likely somewhat comprised of people that don’t have the means or the know how to transact bitcoin or via traditional bitcoin exchanges and bitcoin wallets. Those with access to a brokerage account or those who are more familiar with the buying and selling of other financial assets may find buying and selling GBTC shares much more familiar and much easier.

The second reason that people pay this premium is likely for diversification. We certainly know that because bitcoin is still in its infancy and mishaps with exchanges have happened in the past, that owning the financial asset across a broad range of mediums may be a reasonable way to protect your holdings and make them more risk adverse. If you were looking to diversify and are long-term oriented, paying this premium might make sense to you.

The third reason that we believe investors don’t mind paying the premium is because those with a longer-term focus on bitcoin, like us, believe that bitcoin will appreciate significantly more in the future. With some software experts like John McAfee recently prognosticating that the coin will hit $500,000 per bitcoin in the future, a 75% premium may not seem completely irrational to those with a long-term oriented focus. 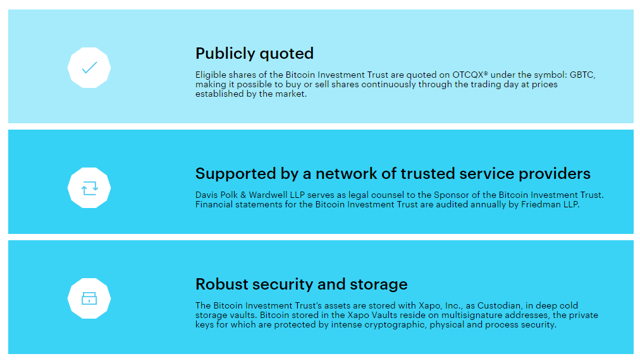 Wrapping up these three major pros of owning GBTC gives us a relatively reasonable and somewhat understandable explanation as to why investors have priced the premium into GBTC shares that they currently hold.

Flipping things on their head for a second, the larger premium also obviously means that there is a somewhat larger risk profile to owning GBTC than owning bitcoin. For instance, you are essentially already over paying for the price of an asset to begin with and so if a selloff occurs or a deleveraging starts to take place, the premium may wind up getting zapped almost immediately due to the illiquid nature with which GBTC tends to trade.

Because GBTC is listed on the over the counter exchange and because bitcoin is still relatively uncharted territory for a lot of market participants, any type of panic related to the underlying could cause a swift selloff in short order that may not leave investors ample time to exit their position in an orderly fashion.

The nature of the beast is such that bitcoin is already extremely volatile by itself, sometimes swinging 10% or 20% in a day, and so a product based on this underlying but also pricing in a 75% premium could ostensibly be significantly more volatile in the event of capitulation.

One of the other risks of owning GBTC is that, as of last week, it looks as though there is more and more of a chance of additional exchange listed bitcoin products coming to market. GBTC’s monopoly was confirmed when the SEC recently denied a bitcoin ETF from listing, however it is now looking like, with bitcoin options and derivatives about to be trading, it may not be that long until we have another exchange listed product. This is simple supply and demand. As more products enter the market that allow for exposure, not only to bitcoin, but to all digital currencies, the premium will likely shrink. This is simply because it is essentially a price for the privilege to own an asset. As more assets that are of similar style flood the market, the lower the price should move.

Our Take: Everything in Moderation

We don’t believe that owning a little bit of GBTC in addition to holding bitcoin is a bad idea. We like the concept of diversification and we think that having a small percentage of your bitcoin holdings spread across several bitcoin asset classes isn’t necessarily a bad idea. As investors with a long-term focus who are admittedly looking for either a grand slam or a total meltdown from digital currency, we are acutely aware of the risks of owning such an asset.

Investors need to understand clearly the liquidity risk, the premium risk and the derivative like nature of this product and the risk that it carries before confidently being able to slide it in as a part of their overall portfolio strategy. With that said, we believe GBTC plays an important role in the overall crypto currency market and we own a small position in the name.

Disclosure: I am/we are long BITCOIN.

I wrote this article myself, and it expresses my own opinions. I am not receiving compensation for it (other than from Seeking Alpha). I have no business relationship with any company whose stock is mentioned in this article.