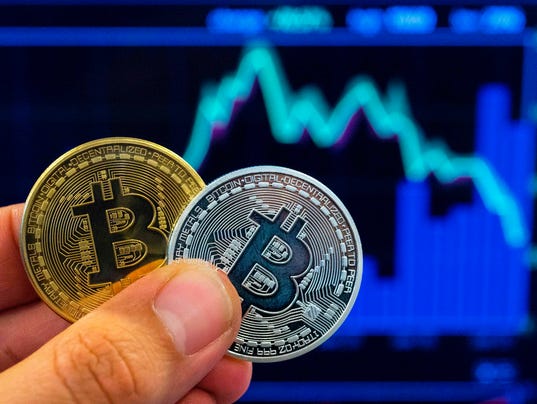 A picture taken on February 6, 2018 shows a person holding a visual representation of the digital crypto-currency Bitcoin, at the “Bitcoin Change” shop in the Israeli city of Tel Aviv.(Photo: JACK GUEZ, AFP/Getty Images)

Cryptocurrency investments that were minting millionaires back in December are now an increasing source of misery.

Blame the financial pain on periodic sell-offs, like the one in the past 24 hours that has wiped out $50 billion of value in Bitcoin and other digital currencies.

A crackdown by regulators has hit this fledgling area of investment in recent months, as some authorities around the world try to tame what they see as a  Wild West-type market.

More recently, two other events have darkened the investment outlook for digital currencies: Google had decided to ban cryptocurrency-related advertising; and there has been massive selling by a trustee of the collapsed Mt. Gox Bitcoin exchange.

“Unfortunately, the future of crypto is still quite foggy and the latest developments did not give us a clearer picture,” Arnaud Masset, a market analyst at at Swissquote Bank, told USA TODAY. “The honeymoon is over and it is time to face reality.”

All 10 of the biggest cryptocurrencies measured by market value have all suffered price declines in the past 24 hours, with losses ranging from 4% to 15%, according to coinmarketcap.com.

That slide has slashed the market value of all the world’s 1,565 digital currencies by $50 billion as of 1:30 p.m. ET on Thursday.

The total value of the market is now $322.9 billion, down from $372.9 billion yesterday and less than half the total value at the peak in mid-December 2017, coinmarketcap.com data show.

Investors, excited by Bitcoin‘s nearly 1,400% gain last year, flooded into this volatile investing space in search of big gains. Critics warn that the huge rally in 2017 is a sign of a classic speculative bubble that will eventually burst.

More: Bitcoin: If currency crashed, plunge would harm its investors but not economy

There are a number of factors driving down the price for cryptocurrency investments:

A feared crackdown on cryptocurrencies by regulators in the U.S. and abroad has for months dogged this new, largely unregulated investment area, one that has been the subject of many scams that have caused investors to lose money.

The latest setback came recently when the Securities and Exchange Commission warned that many of the online cryptocurrency trading platforms might be “potentially unlawful.” Wall Street’s so-called “top cop” also stressed that investors might have gotten the “misimpression” that these online trading platforms are registered with and regulated by the SEC, “when they are not.”

Google, this week, joined Facebook in banning all cryptocurrency-related. The ban, which goes into effect in June, includes advertisements for initial coin offerings, digital wallets and investment advice. Protecting consumers from fraud was cited by Google as the main reason for the ban.

The trustee of Japan-based cryptocurrency exchange Mt. Gox, which collapsed in 2014 after 850,000 Bitcoins went missing, is in the process of selling large amounts of Bitcoin to pay back creditors. And that forced selling, which is seen as temporary, is weighing on the price of the digital currency.

Bitcoin bulls say the wild price swings are normal and that Bitcoin and other cryptos will rise again.

While investor sentiment among “novice mainstream investors may be trepidacious,” savvy investors that buy Bitcoin on price dips and hold them will “reap the rewards,” says Evander Smart, founder of Bitcoin University. “In Bitcoin, you exchange volatility for economic gain.”