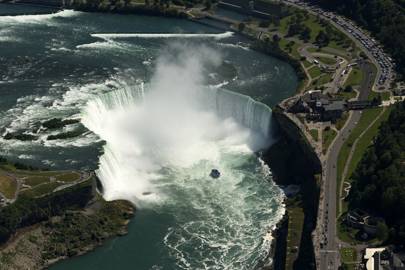 Plattsburgh, New York, perches on the shores of the vast Lake Champlain on the US-Canada border. It’s a small city – population less than 20,000 – with clapboard houses and an impressive city hall. During the Cold War, the busy local air force base hosted B-52 bombers, F-111 fighters and air-refuelling tankers – but since the base closed in 1995, the town has relied on tourism and the small industrial businesses that fill the hangars and halls left unclaimed by the city airport. Back in 2016, the city seemed to be turning the corner with a $10 million development grant from the state’s governor to revitalise the weary downtown district. Then the Bitcoin miners arrived.

“The resident hobbyists are no problem,” says Plattsburgh mayor Colin Read. “But when out of towners noticed cheap rates just as Bitcoin prices began to spike they flocked here. Currently 15 per cent of our power supply is used by the large Bitcoin operations – which pushes us over the city’s quota on cold winter days – meaning we have to buy power on the open market to meet demand, increasing costs by 30 to 50 per cent.”

Thanks to nearby Niagara Falls, Plattsburgh has a quota of cheap electricity available at a low rate – 2.7 cents/kwh for residential or five cents/kwh for industrial use – against a US average of seven or eight cents. The general rule of thumb for those wanting to compete with Chinese miners is to keep electricity costs at four cents or less, according to Shone Anstey, co-founder of Blockchain Intelligence Group. And so Plattsburgh’s prices have attracted cryptominers to the region since late 2016 and the city now hosts two large miners, six medium-sized operations and hundreds of hobbyists. This added nearly $10 to residents electricity bills for January.

Read, a former economist, says his main concern is that – unlike traditional industries or even server farms – the electricity demand of cryptomines don’t correspond to jobs or investment in the city. “Per MW of capacity, cryptominers create one one-hundredth of the jobs we would typically see from an industrial user with the same power needs,” he argues. “Typically, if a company moves into the area they’ll build a factory – that takes six months, offers jobs and invests them in the area. Cryptominers can come and go in a weekend – it’s the most footloose industry I’ve ever seen, the most energy intensive industry and the least labour intensive.”

The city struck back in March, banning the launch of new Bitcoin mining firms for 18 months and asking the local power regulator – the New York State Department of Public Service – for permission to raise electricity rates for existing miners. In May and June, the Department agreed – allowing Plattsburgh and neighbouring counties to impose extremely high-density load tariffs on Bitcoin cryptocurrency miners.

“These companies are using extraordinary amounts of electricity – typically thousands of times more electricity than an average residential customer would use,” according to a spokesperson for the department. “The sheer amount of electricity being used is leading to higher costs for customers in small communities because of a limited supply of low-cost hydropower.” WIRED contacted the two largest cryptominers in the city – Plattsburgh BTC and cryptomining company Coinmint’s subsidiary North Country Data Center for comment, but neither offered a response.

Plattsburgh was just the beginning. In spring, the People’s Bank of China started shutting off power to large server farms mining Bitcoin while, in June, the regional government in the Canadian province of Québec blocked all new requests for hydroelectric power from cryptocurrency-mining operations. In Iceland, the finance minister has warned that cryptocurrency mining – which uses more power than the nation’s entire residential demand – could severely damage its economy. Is the libertarian dream of Bitcoin as an unregulated global currency about to be destroyed by municipal electricity companies?

“This is a crucial moment for Bitcoin – and, by extension, the blockchain,” argues Steve Davies, blockchain leader at auditing firm PwC. “As the original cryptocurrency it is important that Bitcoin endures and it’s damaging to the whole promise of blockchain if there is this sort of major hiccup. The strength and the weakness of a truly decentralised model is that when something like this comes up there is no a central body to regulate when things go wrong.”

Bitcoin miners use enormous amounts of electricity to power the kit engaged in a computational race to find a particular answer to an algorithm. The solution is so complicated that the best way to solve it is a series of guesses. The more guesses a computer makes, the…