For the second day running, cryptocurrency prices held steady Tuesday as the market stabilized in the wake of last week’s sharp selloff, which pushed most digital currencies to 2018 lows.

While the outlook for major digital currencies remains uncertain with advertising and regulatory issues lingering, one analyst has called the end to alt-coin bear market.

The alt-coin selloff is over

Perennial Bitcoin bull Tom Lee has seen enough. The managing partner at Fundstrat Global Advisors, who last week said the end to the Bitcoin selloff was insight, said today in a note to clients that the bear market for alt-coins is over.

As bad of a year it’s been for Bitcoin investors, those in alt-coin have been wiped out, with many losing upward of 80% of their portfolio, often taking to social media to share their stories of misery.

However, the extent of this selloff in the smaller coin market puts it on par with previous declines which Lee says is a good indicator for a bottom.

“We believe the bear market is over, because the our preferred measure [the percent of alt-coin stocks that have risen by more than 3X in the past 90 days] is back down to 3%. This is historically the level at which alt-coins bear markets typically bottom,” wrote Lee. 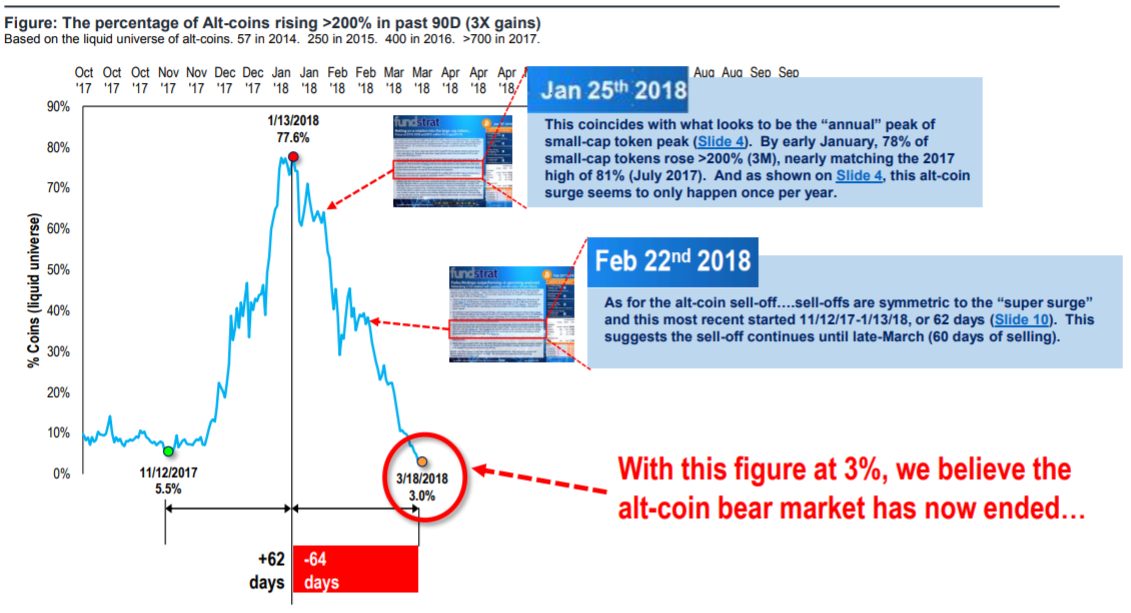 While the bear market may be over, Lee believes the timeline to jump back on the alt-coin bandwagon is still a few months away.

“In our view, given the overhang from SEC actions (potential to require tokens to be registered) and the potential backlash from Washington, we think mid-September is probably the more correct window,” Lee wrote.

CryptoWatch: Check Bitcoin and other cryptocurrency prices, performance and market capitalization—all on one dashboard