Bitcoin and other major cryptocurrencies have soared over the last 24-hour trading period with Bitcoin adding around 6% and climbing as high as $7,600 on the Luxembourg-based Bitstamp exchange.

The Bitcoin price, which looks set to close the year around double where it began 2019, has been stuck in on a downward trend for the last few months, losing around half its value since its summer highs.

The Bitcoin price has bounced around wildly over the last couple of months as Bitcoin traders and … [+] investors try to find stable ground.

The cause for Bitcoin‘s latest rally was not immediately clear, although many Bitcoin and crypto market watchers have been eagerly-awaiting a so-called Santa rally to give Bitcoin a last-minute boost in the run up to Christmas.

Bitcoin’s surge higher over the weekend was broadly reflected in other top ten digital tokens, with ethereum, Ripple’s XRP, Bitcoin cash, litecoin, and EOS all adding between 2% and 5%.

The combined value of Bitcoin and all other cryptocurrencies is now once again nudging $200 billion, according to CoinMarketCap data.

Last week, the Bitcoin price fell as low as $6,500 before staging a sudden recovery, leading to speculation Bitcoin mining costs, which have recently been found to average some $6,300 per Bitcoin, could be giving Bitcoin its current price floor.

Elsewhere, Bitcoin and cryptocurrency market sentiment, measured by crypto trading platform SFOX, moved from bullish to neutral earlier this month—somewhat dashing hopes that Bitcoin could be about to return to its year-to-date highs in the run up to Christmas. 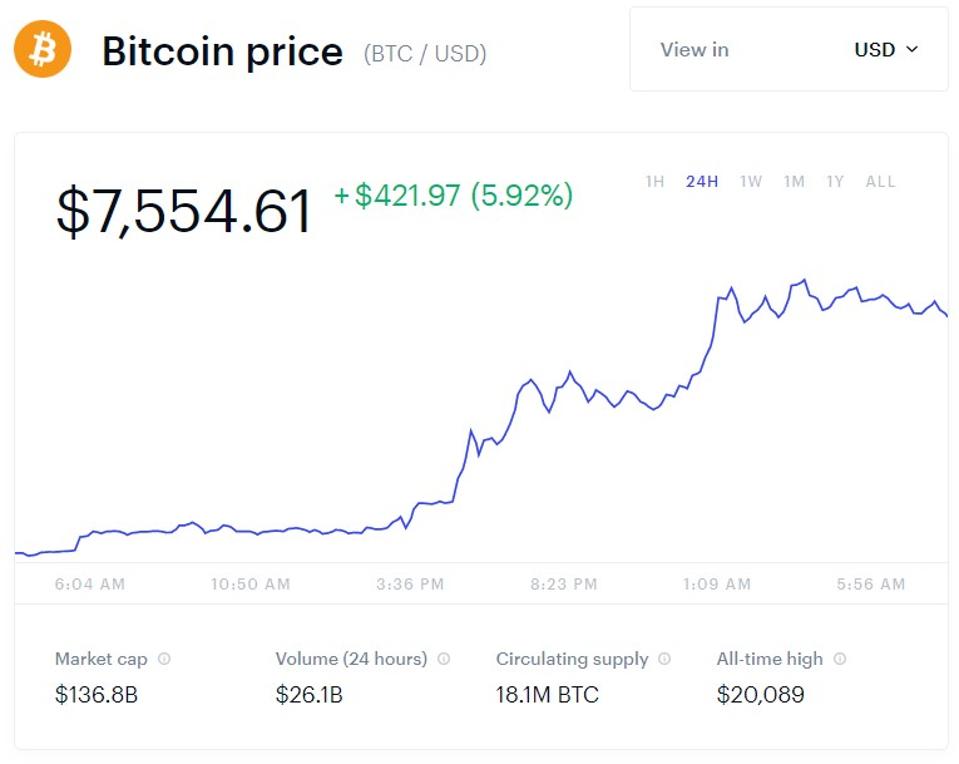 The Bitcoin price ticked higher over the weekend, with Bitcoin bulls now targetting $8,000 per … [+] Bitcoin.

Going into the new year, Bitcoin and cryptocurrency bulls have pointed to the upcoming Bitcoin halving, set for May 2020, the possibility of fresh new institutional investment, and work being done to encourage Bitcoin and crypto adoption as potential catalysts for Bitcoin‘s next move higher.