Cryptocurrencies were without a doubt the most spectacular market story of 2017. Bitcoin, the crypto bellwether, was up over 1,300% (shown below) but wasn’t even close to being the top performer. Other popular tokens like Ethereum and Ripple went parabolic at over 9,000% and 36,000% for the year, respectively.

If you missed the rally, don’t be too hard on yourself because you were in really good company. Here’s what a few gray-haired investors had to say about crypto during and prior to the surge.

· Warren Buffett – “Stay away from it. It’s a mirage, basically…the idea that it has some huge intrinsic value is a joke in my view.”

· Jack Bogle – “Avoid Bitcoin like the plague. Did I make myself clear?”

· Ray Dalio – “Bitcoin today you can’t make much transactions in it. You can’t spend it very easily. It’s not an effective store-hold of wealth because it has volatility to it, unlike gold. Bitcoin is a highly speculative market. Bitcoin is a bubble.”

· Howard Marks – “Digital currencies are nothing but an unfounded fad (or perhaps even a pyramid scheme), based on a willingness to ascribe value to something that has little or none beyond what people will pay for it.”

· Carl Icahn – “It’s sort of amazing to me. If you read history books about all these bubbles, like in Mississippi – where John Law went around selling all this land in Mississippi that was sort of worthless and the French were going crazy giving him all this money. And then one night it all blew up … to me, this is what this is. Seems like a bubble.”

· Richard Bernstein – “One would have thought that investors would have learned their lesson from the deflation of the technology and housing bubbles, but that doesn’t appear to be the case. The sad reality is that many more investors will likely get sucked into this bubble too.”

I mostly agreed with the gray-hairs, but I also didn’t think BTC would just evaporate into nothing. In my own words I wrote, “Like all bubbles, it will burst, that much I agree with. But when all is done, I don’t think we hear last of Bitcoin. Rather I think it matures and finds its place, wherever that may be.”

So far in 2018, the gray-hairs are right. Crypto has crashed from its January high. The question bagholders have now is what’s next for BTC (and by BTC I mean all cryptos in general)? 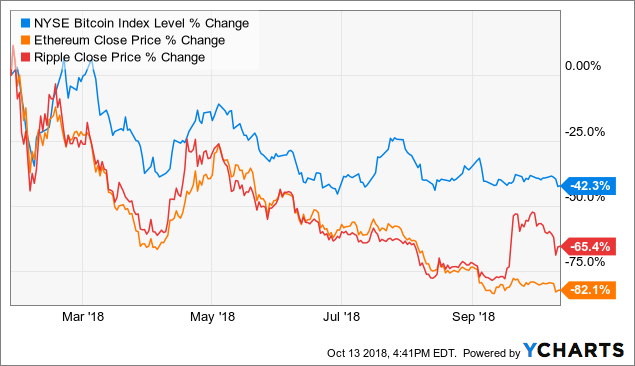 To be honest, nobody knows, I certainly don’t. But those obsessing over BTC prices may be missing the bigger picture. Even if all cryptocurrencies end up totally worthless, there will still likely be a huge, long-term opportunity in blockchain the underlying technology.

A blockchain is like a digital ledger that records transactions between parties. Each transaction is recorded as a block of code linked to previous blocks in a chronological chain visible to all parties involved. The technology is secure, efficient, and has many practical applications. 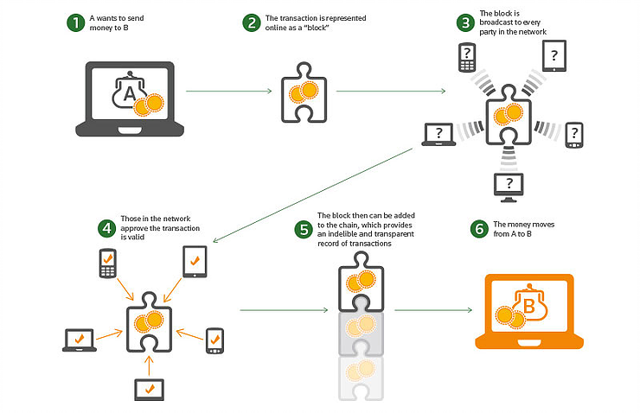 Examples include streamlining the transfer of assets like securities or real estate. Currently, the sale and purchase of such things require layers of middlemen (brokers, clearing houses, title companies, etc.). Each layer adds time, cost, and complexity to the process, but they’re necessary because there’s no standardized, automated, and secure way to simultaneously record a transaction for all parties involved. Applications don’t stop there, blockchain could disrupt everything from medical records to inventory management because the technology is still in infancy.

The point is despite the surging interest in Bitcoin the currency, the real long-term opportunity may actually be in blockchain the technology. Companies small and large are still scrambling with how to capitalize on blockchain’s potential. FT reporter Sally Davies put the opportunity in proper context with her now famous analogy, “Blockchain is to Bitcoin, what the internet is to email.“

Blockchain’s potential is huge, yes, but if only it were easy to capture. As with any emerging opportunity, new ventures are proliferating rapidly in this space. And while some sound attractive, some are total frauds, and most are unprofitable, financially unstable, hard to value.

Despite that, there are plenty of investors who don’t seem to care about the substance behind the cryptocurrencies or crypto-related companies and stocks that they pump money into.

Take, for example, Blockchain Technology Consumer Solutions (OTCQB:BTCS). This is a penny stock that gets promoted on ambiguous forums all over the internet but trades an average of almost 2 million shares a day.

On the surface, it’s easy to see why. A quick look at the company’s website provides enough buzzwords to send crypto-speculators into a frenzy. In big, bold letters the homepage reads “THE BLOCKCHAIN MEANS DISRUPTION.” Also displayed is the company’s redundant claim to fame,…