The problem with using a long-term valuation approach to Bitcoin (BTC-USD) (COIN) (OTCQX:GBTC) is that you only have a clear direction when the market has made a severe mistake. If the market has priced Bitcoin too low, it’s a great time to buy; if it’s too high, maybe you should move some of that into cash or another asset class. However, when the models say the price is fair, or when they contradict each other, what do you do?

One clue we have comes from the past behavior of bubbles, which do seem to repeat with moderate variation every few years. In other words, there does seem to be a very large psychological component to Bitcoin’s price, that causes bubbles to emerge, and eventually pop. After a bubble, people need to psychologically reset, but when the market starts going crazy, people stampede in and FOMO takes hold.

In previous articles, I have argued that the Bitcoin price and the hash power of the network form a feedback loop. Because of this relationship, we can easily spot divergences between the hash power and price. Ideally, this helps us spot buying or selling opportunities.

Let’s take a look at this relationship over the long term.

Using this model, the price is now significantly below the expected level. However, the magnitude of the divergence has not yet reached the lowest levels that we saw in 2011, 2012, and 2015.

The Mayer Multiple is the Bitcoin price divided by the 200 DMA of the price. Recently, it has dropped down to levels that haven’t been seen in several years. 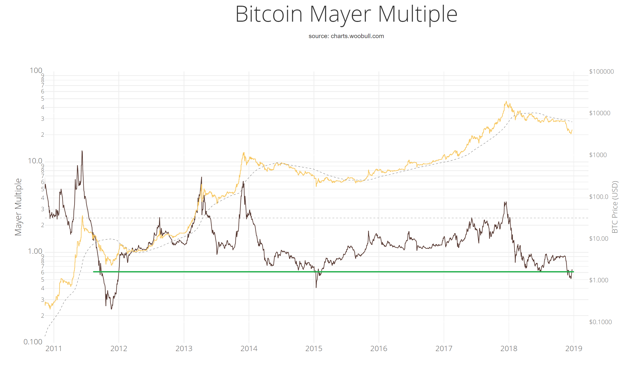 There have been lower readings in the past, but it’s been nearly four years since we saw the 0.6 to 0.5 level. Using this approach, Bitcoin today might be a very good buy.

The total transaction count that have ever confirmed on the Bitcoin network has been growing since the very beginning. I have suggested in the past that the total transactions are an interesting proxy for the age of Bitcoin. As long as they’re increasing, Bitcoin is still alive.

The total transaction count is one of the inputs into the Bitcoin Value Indicator reports that I publish here once a month. Let’s look at this relationship on a more granular level.

Using this model, Bitcoin’s price does come in under what’s expected. However, in the past, this state (where the price is below expected) has persisted for many months or even years. So, maybe it’s a good time to buy, but there doesn’t seem to be any reason to rush in at this point. If this period of undervaluation continues, then there will be plenty of time to take a position when (or if) it’s right for you.

There are several ways to value the Bitcoin network using Metcalfe’s Law. My approach is to use the daily transaction count and the number of unique addresses, which I wrote about here.

Using the number of unique addresses in use, it does not appear that we’re out of the woods yet. The price is still clearly over what’s predicted, indicating that the current price of Bitcoin is not supported by the network.

The daily transaction count tells the network story from the point of view of the activity of the network, rather than the number of participants. Using the same approach as above, let’s see what we find.

From the point of view of network valuation, it appears that the price of Bitcoin is still too high. In order to close this gap, the price has to come down, or the activity levels need to go up (or both).

The NVT is a way to measure the value transmitted over the Bitcoin network compared to the price of Bitcoin. I’ve written a review of this approach, which you can find here. The “too long; didn’t read” version is that the approach is interesting, but it seems to lag the market by…