The Bitcoin and cryptocurrency market has lost a combined $170 billion since its year-to-date high set in June, with major tokens ethereum, Ripple’s XRP, and litecoin all falling steeply.

The Bitcoin price has almost halved, dropping from almost $14,000 to trade at around $7,600 today (though some heavyweight crypto investors remain upbeat).

However, one relatively minor cryptocurrency, chainlink, has more than doubled since June, jumping from around $1 to $2.55 after the company behind the token revealed a raft of partnerships and deals to use its technology.

After rallying hard earlier this year, the Bitcoin price has been stuck on a downward trend for the … [+] last few months, dragging the likes of ethereum, Ripple’s XRP, and litecoin with it.

The chainlink token, which trades under the name link, began the year at $0.25, climbing to highs of around $4 per link token, before falling back along with the wider Bitcoin and cryptocurrency market.

Chainlink, an ethereum token that powers the Chainlink decentralized oracle network allowing smart contracts on ethereum to connect to external data sources, APIs, and payment systems, has managed to stage a strong recovery since the late summer sell-off, breaking away from the wider Bitcoin and crypto market, which has been falling steadily.

Some of chainlink’s recent gains could be due to its efforts to expand into China just as China’s president Xi Jinping has revealed the country will work to widely incorporate blockchain technology over coming years.

In April, the Chainlink organization hired a Chinese community manager.

Elsewhere, OpenLaw, which is developing decentralized peer-to-peer legal agreements, started working with the Chainlink organization in April on its smart legal contracts. 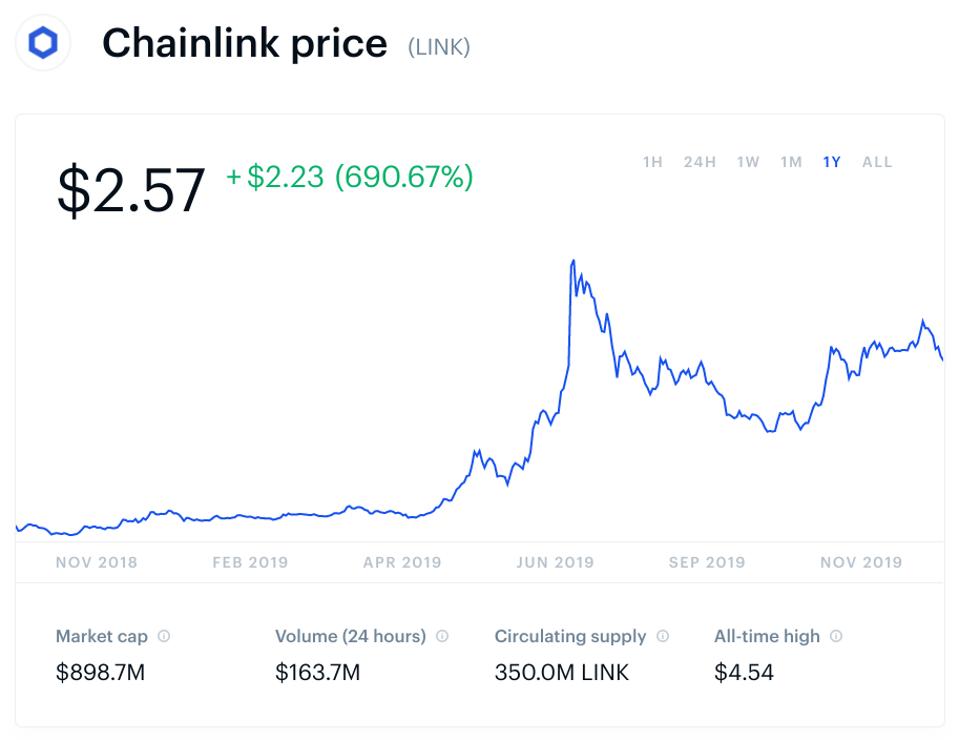 Some analysts have, meanwhile, been talking up chainlink’s prospects.

“I noticed a similar structure to ethereum’s price behavior in 2016 or, dare I say, Bitcoin between 2011 and 2012. I wouldn’t be surprised to see link hovering around $10 and making it to the top 10 cryptocurrencies in CoinMarketCap by mid-2020.”

Other crypto watchers have though warned chainlink investors that the token’s bull run could be coming to an end.

“Anything can happen, [chainlink] often defies gravity,” Bitcoin and crypto trader Scott Melker said via Twitter alongside technical charts and analysis of the chainlink price. “But never bad to take profit if you have the chance.”