A look at how Bitcoin performed in 2018 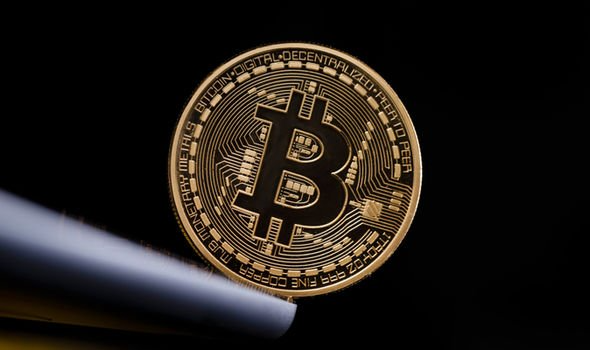 While the
leading currency lost over 80% of its value since the “peak Bitcoin” in
December 2017, many day traders made fortune during the downtrend placing the
right orders at the right time. Let’s go through some examples, so you can
decide whether it was within your reach.

2018 was a
dramatic year for cryptocurrency HODLers. They spent most of 2017 with head in
the clouds checking every morning how much the value of their crypto wallet has
gained overnight, and probably buying more and more.

The
bonanza was at its full speed in late November – early December and then… the
crazy rollercoaster happened. Bitcoin nearly reached $20,000 on December 17. In
the next 5 days, it dropped almost by half. Then in the first days of January,
it climbed back to $17,000, only to plummet to $6,400 in the next month. 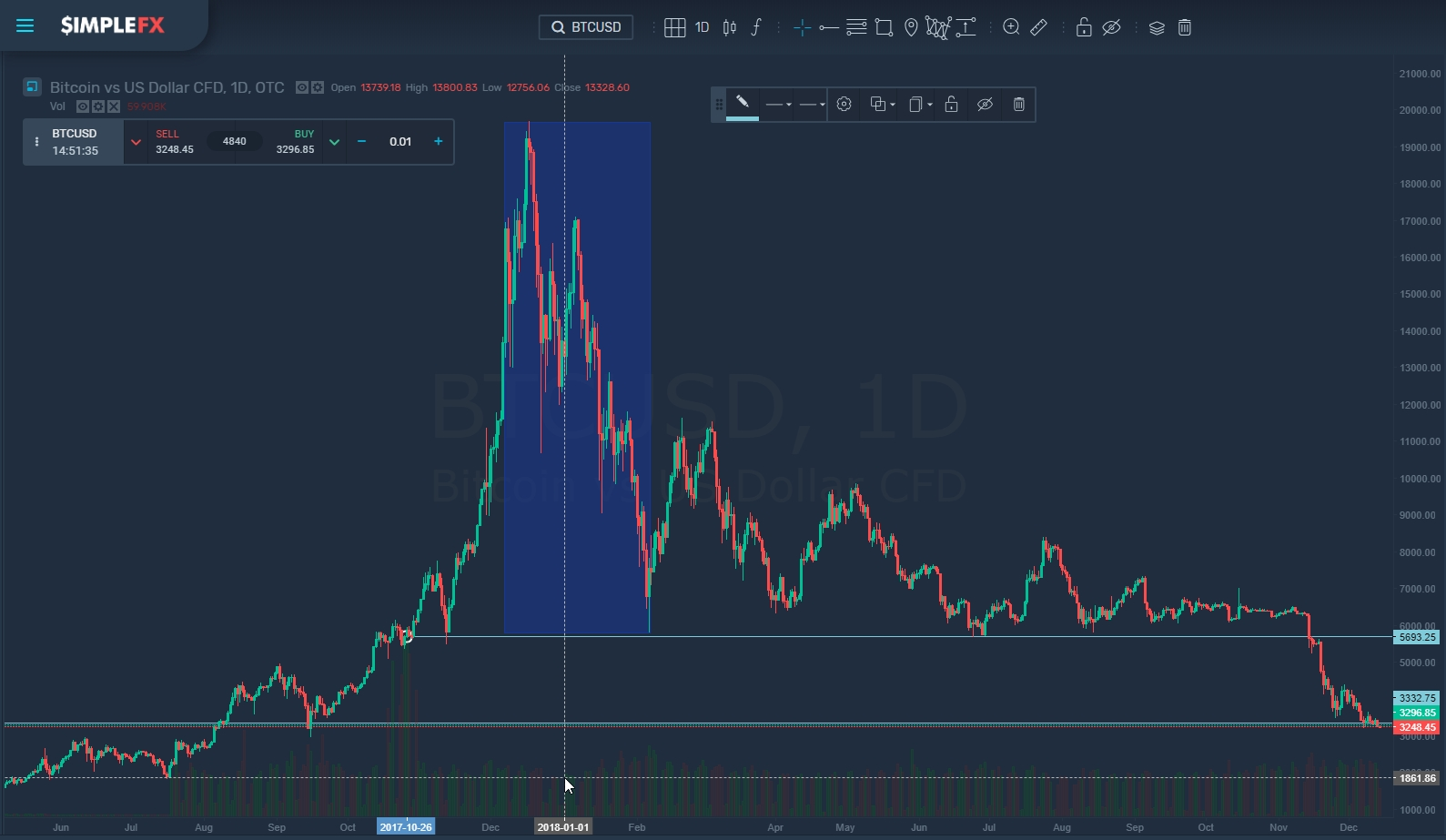 The bullish traders were fighting
the downtrend throughout the first three quarters. Then in September, the volatility
decreased. The BTCUSD entered a sideways drift
that lasted until November 14. Bitcoin broke the $6,000 and then $5,500 support
levels. In the time of writing this article, it’s testing the support levels
from September 2017.

Cryptocurrency enthusiast wanted a
trend reversal that never happened. The price of Bitcoin is going down, and
2018 was 100% of the time bear market.

Not a bad year for CFD Traders

In the long run Bitcoin and cryptocurrencies have a bright future. The
blockchain technology is developing and being adopted in new fields with
success. Bitcoin as a long-term investment proved to be a horrible choice for
the people who hunted for buy low occasions in 2018. On the other hand – who
knows, maybe we have reached the bottom already. We’ll learn in the next days,
weeks or months.

While the cryptocurrency market
capitalization fell from almost $831bn in January 2018 to $104bn in
mid-December, crypto CFD traders have nothing to complain as a well-trained eye
can see strong technical analysis patterns that navigated the traders through
the uncharted waters.

For skilled traders, the first half
of 2018 was a great period as Bitcoin Volatility Index stayed above 7% in
January and February, then fell to average levels. The third quarter was a lazy
time for Bitcoin day traders as the volatility fell below 2%. Things came back
to life in November and by December it was way above 5% again.

Some profitable CFD trades were
made across the world. Let’s take a look if the 2018 trading opportunities were
within a reach an intermediate individual trader and check if a beginner trader
could have made some money.

We’ll retrospectively use just the
basic indicators: Japanese Candlestick Reversal Patterns and Fibonacci Retracement Tool, and see
if it was doable. We’ll take a look at the BTCUSD chart – the most important
cryptocurrency – in a different scale – from macro 1-week view to the most
detailed 1-minute. Let’s go!

We’ll take a look at
a broad picture with weekly candles and see if the big trend reversal was
preceded by any sign. It turns out it all started with a strong bearish
engulfing pattern. 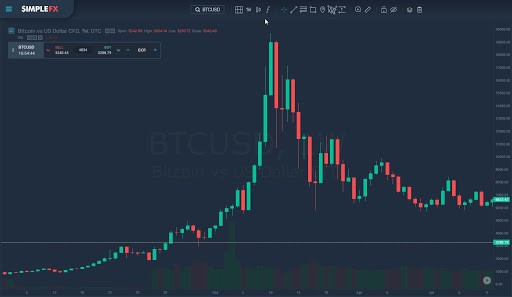 The green candle representing
12/10/2017 week is fully engulfed by a huge red candle in the next week.
Furthermore, the pattern is confirmed by the next red candle. Taking into
consideration just this strong sign a novice trader (you usually start with learning
this kind of stuff, when you just learn how to read Japanese candlesticks).

What extraordinary skills were
necessary? What can we learn from it? This only worked if you took a multiweek
trading strategy. This is a long-term attitude that requires a lot of
self-control and discipline, but this shows that in the case of market turmoil
it pays to stay calm.

Technical analysis tools are very
useful in cryptocurrency markets since there are little intrinsic value
indicators that would be useful in determining the price. Let’s see if
Fibonacci Retracement was useful during the crash. 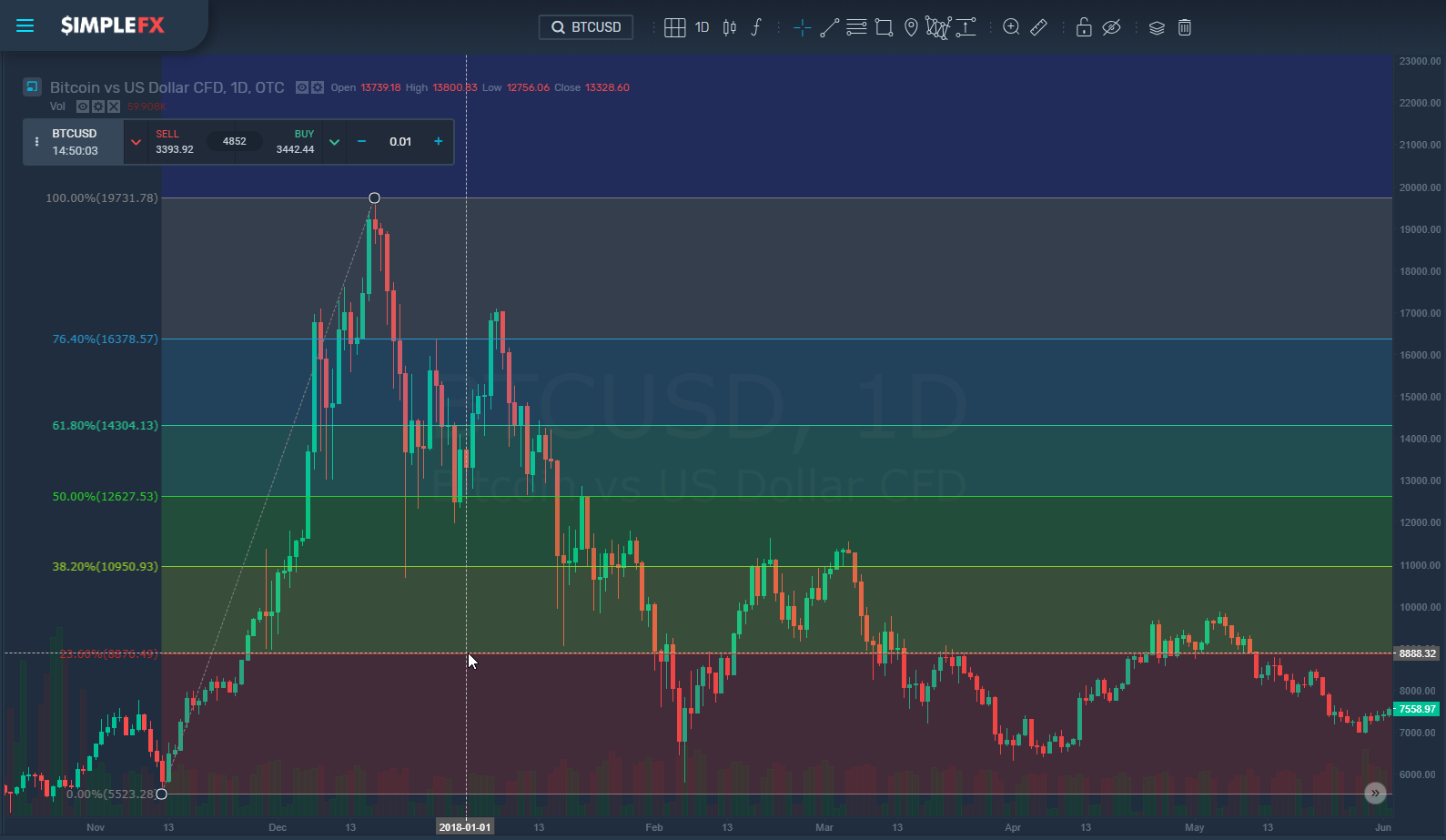 Fibonacci
Retracement Tool works neutral. The call whether it’s just a retracement or a
reversal is a different thing. Trying to get into the minds of 2018 Bitcoin
traders we connect connect the swing low from November 12 with swing high on
December 17. Let’s imagine I’m doing it planning my trading strategy after the
New Year’s Eve party on January 1, 2018. Here are the Fibonacci levels
projected on a one day chart for the first half of 2018.

The
basic support level wasn’t broken until November 24. At the beginning of the
year when the local bottom was reached on February 6, both the first and the
second resistance levels proved to be useful when taking short positions for
traders that included year-long downtrend in their trading strategies.

Now
let’s take a look at BTCUSD retracements at a 1H chart in mid-December. 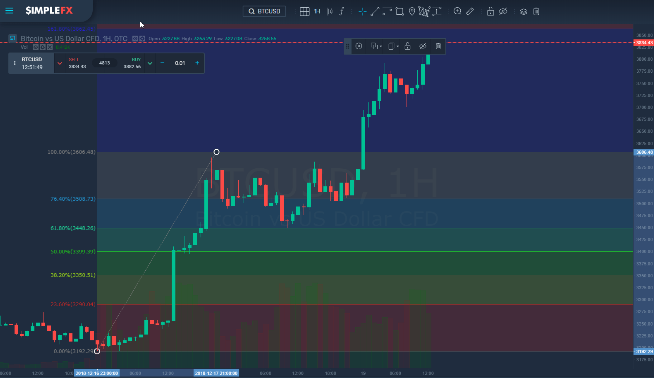 You can see that what seemed to be
just…